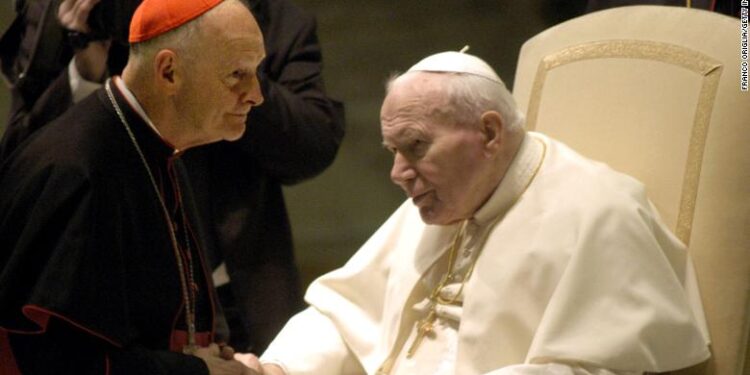 The late Pope John Paul II was warned about allegations of sexual impropriety by Theodore McCarrick, but chose to promote him to Archbishop of Washington anyway following McCarrick’s own denials and an investigation by American bishops that returned “inaccurate and incomplete information,” an internal Vatican investigation concluded Tuesday.

The report into the Vatican’s handling of the highest ranking Church figure to be defrocked over sexual abuse comes after two years of investigation, and years’ worth of scrutiny over how McCarrick was allowed to rise through the hierarchy.

Raised to cardinal in 2001 by John Paul II, a year after he became Archbishop of Washington, McCarrick went on to become a power player both in the Church and in Washington DC, and was known for his fundraising and influence.

He resigned from the College of Cardinals in 2018 and was defrocked by the Vatican last year after a Church trial found him guilty of sexually abusing minors.

The Vatican’s report largely appears to absolve the current pope, Francis, from blame.”Until 2017, no one … provided Pope Francis with any documentation regarding allegations against McCarrick,” the report’s executive summary said.

“Pope Francis had heard only that there had been allegations and rumors related to immoral conduct with adults occurring prior to McCarrick’s appointment to Washington,” the report said, adding that Francis at first believed “that the allegations had already been reviewed and rejected by Pope John Paul II.”

It detailed allegations against McCarrick at the time Pope John Paul II made him Archbishop of Washington, which the report said fell into four categories.

Those alleged incidents related to McCarrick’s time as bishop of Metuchen from 1981 to 1986, and as Archbishop of Newark from 1986 to 2000. John Paul II appointed him to both posts, and personally made the decision to appoint him Archbishop of Washington, the report found.

Tuesday’s Vatican report does not focus on McCarrick’s alleged abuses or his culpability under canon law, instead shedding light on what the Holy See knew about him and when.However, the report outlines that “numerous individuals who had direct physical contact with McCarrick were interviewed” over the course of the two-year probe.”

During extended interviews, often emotional, the persons described a range of behavior, including sexual abuse or assault, unwanted sexual activity, intimate physical contact and the sharing of beds without physical touching. These interviews also included detailed accounts related to McCarrick’s abuse of authority and power,” it said.

The report claims that Pope Benedict XVI asked for McCarrick’s resignation in 2005 after “accusations of harassment and abuse towards adults began to surface once again.”

It adds that the Vatican’s Office for Bishops told McCarrick orally in 2006 and in writing in 2008 to retire from public life, but that he ignored those recommendations.

The report says that Pope Francis was also aware of “rumors related to immoral conduct with adults” prior to McCarrick’s appointment to Washington but decided not take any further action to modify “the course adopted by his predecessors.”

When the first accusation of sexual abuse of a minor emerged in 2018, Pope Francis’ response was “immediate” according to the report, and he dismissed the former Cardinal from the priesthood.