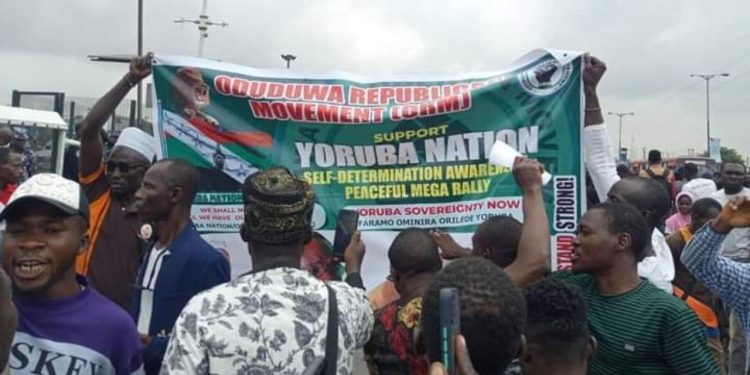 The organisers said the rally was postponed after police intervention and a need to curb COVID-19 spread.

The Commissioner of Police (CP) in Lagos State, Mr Hakeem Odumosun, in a statement after meeting with Animashaun on Thursday at the command’s headquarters, said that any rally or mass gathering in any part of the state would expose the participants and innocent residents to traffic problems, health hazards and avoidable security infractions.

The YAF national coordinator, Chief Adesina Animashaun, made this known on Friday.

He said, “I met with the CP on Thursday afternoon and the reasons he gave for us to postpone the really are ideal.

“The CP also asked me to sign an undertaking to call off the rally, walk to forestall gridlock, new wave of COVID-19, among others, which I did.

“As a law-abiding citizen, I realised that the reasons given by the CP are ideal.

“However, our sensitisation about the need for one Nigeria is not something we push under the carpet. The rally will eventually hold at a later date that we will decide.”

Recall that personnel of the Lagos State Police Command on Friday surrounded the Gani Fawehinmi Park, Lagos State over a planned anti-Yoruba nation rally by the Yoruba Appraisal Forum.

The police had said that intelligence revealed that the group was mobilising for a mega rally in the state on Friday despite the arrest of some agitators at the July 3 rally which took place at the Gani Fawehinmi Freedom Park, Ojota.

The police command, in a statement issued and made available to reporters on Thursday evening, urged parents and guardians to warn their children and ward against such activities in the state.

“The Police and other security agencies in the state have been on red alert to prevent any unlawful rally and lawlessness in any part of the state, while parents and guardians are urged to warn their children and wards not to involve themselves in any such activity which may portend danger to the state.

“The ugly incident recorded at the Oodua Republic Rally of 3rd July, 2021, at the same area of Ojota, Lagos State, is still fresh in our memories, let alone the massive destruction of lives and properties experienced during the October 2020 End SARS violent protest in Lagos State,” part of the statement read.