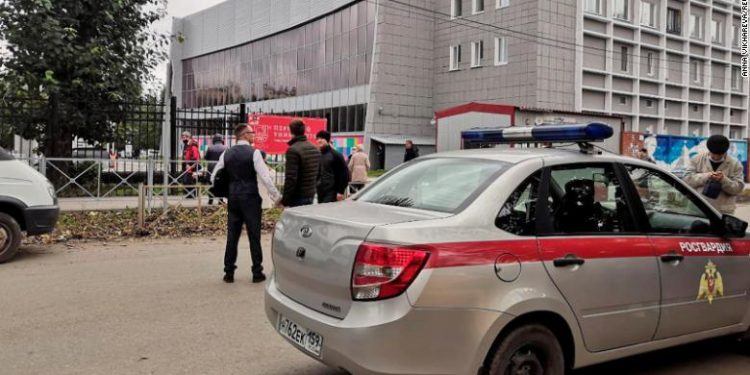 At least eight people were killed when a gunman opened fire at a university in the Russian city of Perm on Monday, officials have said.

A suspect entered the Perm State University campus, some 1,300 kilometers (800 miles) east of Moscow, “with an offensive weapon” and began shooting on Monday morning, the university said on its Telegram channel.

Some students and teachers locked themselves into classrooms during the attack, the university’s press service said, state media agency RIA Novosti reported.

Others were seen in footage captured by local media throwing their belongings out of first-floor windows before jumping down and running to safety.

A suspect in the shooting was arrested and wounded after resisting law enforcement officers, according to Russia’s Investigative Committee, a state body that handles major crimes. He has been identified as a male student, though it was not immediately clear whether he was a student at Perm State University.

At least 28 people sought medical assistance in the wake of the attack, including some who were hospitalized with injuries of varying severity, according to the investigative committee, which has opened a criminal murder investigation.

Valery Gribakin, spokesman for the Russian national guard, told state news agency TASS that the suspect owned a hunting weapon. “The citizen who started the shooting in Perm had a shotgun legally,” Gribakin said.

Monday’s incident marked the second mass shooting at a school in Russia this year. In May, seven children were killed and 16 others were injured when a gunman burst into a school in Kazan.

In the wake of the Kazan shooting, Putin called on civilian gun ownership regulations to be toughened up.

“I believe that in order to prevent such crimes, there is a need to significantly tighten requirements for civilian gun ownership and strengthen control over civilian-owned firearms. Decisions on the matter should be justifiable and, of course, tough,” Putin said during a cabinet meeting, according to TASS at the time.

He added that “all officials who issue gun ownership permits and provide the necessary documents to weapons owners should have a personal responsibility.”

Binance Under Investigation In US For Alleged Insider Trading, Market Manipulation