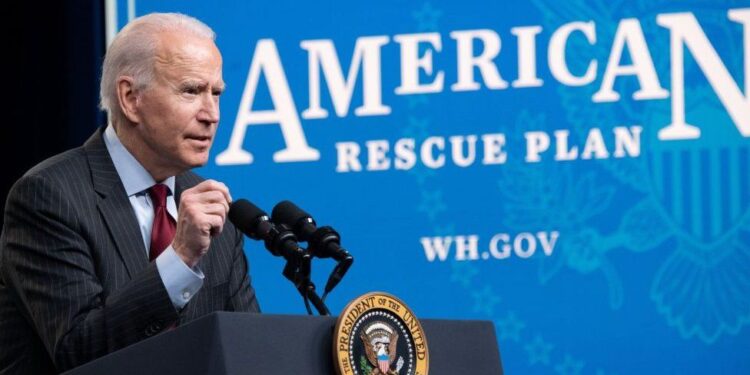 President Joe Biden’s $1.9tn (£1.4tn) relief bill to help Americans deal with the impact of the Covid-19 pandemic has cleared its final hurdle in Congress.

The House of Representatives approved the massive economic aid plan 220-211 on Wednesday along partisan lines, with no Republicans voting in favour.

Having already passed through the Senate, the relief package now heads to Mr Biden’s desk to be signed into law.

This sixth Covid-19 relief bill is a major legislative win for Mr Biden.

The bill passed with all but one House Democrat voting in favour.

White House spokesperson Jen Psaki said the president will sign the bill into law on Friday.

What’s in the bill?

The final bill includes one-off direct payments worth $1,400 to be sent off to most Americans.

It extends weekly jobless benefit payments of $300 until September.

It also allocates $350bn to state and local governments, some $130bn to school reopening, $49bn for expanded Covid-19 testing and research, as well as $14bn for vaccine distribution.

A proposal to raise the national minimum wage from $7.25 to $15 per hour became a sticking point in the Senate and did not make it into the final version of the bill.

The package has been broadly popular among Americans.

A March Pew Research Center poll found that 70% of US adults surveyed expressed support for the bill, including 41% of Republicans.

Democrats – who control both chambers of Congress by narrow margins – largely stuck together and managed to retain most of what was initially proposed.

When announcing the so-called American Rescue Plan in January, Mr Biden said the government needed to “go big” in order to boost the flagging economy.

America’s worst public health crisis in a century has left more than 527,000 people dead and over 29 million infected.

Unemployment skyrocketed over the last year, with a current rate of 6.2%, according to the US Labor Department.

Republicans in Congress objected to the bill’s price tag.

They have called for various elements of the package to be smaller and more targeted, including suggesting stimulus cheques should not go to people who have not lost income in the past year.

“House Democrats have abandoned any pretence of unity,” House Republican Leader Kevin McCarthy said on the floor ahead of the vote.

“After five relief bills, it is on track to be the first passed by strictly party lines.”

He noted it was the most expensive single bill in US history.

A legislative victory – at a cost

Joe Biden just notched his first legislative victory. Now that the $1.9tn Covid relief bill has cleared Congress, the new administration will have a firehose of money to fight the economic and social consequences of the pandemic.

How effectively and efficiently Biden’s team distributes that aid will go a long way toward determining the success of its first term.

If the record amounts of spending boost the economy – without overheating it – the president could reap the political benefits of a revitalised nation. And because Democrats enacted the legislation with no help from Republicans, it may also prove to be an effective cudgel in upcoming elections.

The unilateral nature of the law’s passage, however, comes at a cost. Republicans are now dug in to their partisan trenches, and Biden’s lofty inaugural rhetoric of a new era of co-operation seems a distant memory.

Because of procedural maneuvres, Democrats were able to pass Biden’s Covid bill with a simple majority. Future legislative priorities will almost certainly require some Republican support.

This massive relief package, which provides record amounts of support for low-income families, is a significant accomplishment. Democrats have a lot of work to do if they want any more such wins.

What’s the Covid-19 situation in the US?