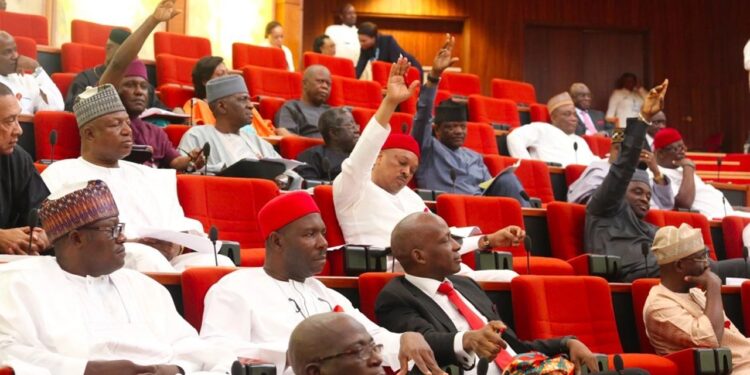 Nigeria’s Senate, on Wednesday, urged the Federal Ministry of Works to allocate funding to the reconstruction of Lagos-Ota-Abeokuta Express Road in the 2022 Appropriation Bill.

The upper chamber also urged the ministry and the Federal Roads Maintenance Agency (FERMA) to temporarily rehabilitate the road pending its overall reconstruction to reduce the hardship and suffering of Nigerians.

Adeola in his lead debate said that over the years, the state of disrepair of major roads in the country had been a cause for concern for all Nigerians.

He said that the vast stretches of the once motorable and ultra-busy Lagos-Ota-Abeokuta Express Road had totally collapsed without any sign or signal for palliative repairs, rehabilitation or reconstruction from agencies charged with road maintenance.

Adeola said: “The Senate notes that over the years the state of disrepair of major roads in Nigeria has been a cause for concern for all patriotic Nigerians desirous of alleviating the suffering of majority of the people.

“Aware that since the dawn of our nascent democracy in 1999, all Appropriation Acts passed by the National Assembly contains provisions and budgetary allocations for road maintenance, road reconstruction, completion of ongoing road projects and construction of new roads.

“Alarmed that vast stretches of once motorable and busy Lagos –Ota-Abeokuta Express Road from Surulere through Mushin, Oshodi, Agege Motor Road, Alagbado onward in Lagos State to Ota, Ifo, Papalanto, Ewekoro, Itori, Wasimi, Obada-Oko and Abeokuta, the Ogun State capital, has totally collapsed without any sign or signal for palliatives repairs, rehabilitation or reconstruction from agencies charged with road maintenance, repairs and reconstruction.

“Further Aware that this road is of vital socio economic importance not only to the people of Lagos and Ogun State, but all Nigeria as it leads to the foremost Nigeria industrial/manufacturing hub with the highest number of industries including such heavy duty industries like Dangote Cement Industry at Ibeshe, Larfarge Cement Industry at Ewekoro, Dufil Foods, makers of Indomie Noodles, Nestle and Honda among others as well as such educational and religious institutions as the Covenant University, Ota, Bells University, Ota, Winners Chapel, Ota etc.

“Regrets that thousands of our citizens and hundreds of articulated vehicles are daily held up for hours in traffic gridlocks for upwards of 6 hours at a stretch for a journey that ordinarily would not last more than 30 minutes, all resulting in huge loss of man-hours, untold suffering, accidents and unfavourable business environment for the teeming industries in the axis.

“Concern that the Expressway that is supposed to be a major alternative to the usually congested Lagos- Ibadan Expressway is in such a state of total neglect and disrepair.

“Further aware that the then Federal Ministry of Power, Works and Housing in May 2018 announced a programme of rehabilitation of Lagos –Abeokuta Expressway through an award of a two- and half-year contract of N22.387billion to Julius Berger Plc but nothing was done to make any difference on the critical road till date.

“Further notes that recently, the Federal Road Safety Commission, FRSC, made a passionate appeal on the Federal Government for palliatives measures to reduce the untold hardship, accidents and robberies that are traceable to the completely collapsed sections of the Lagos-Ota-Abeokuta Express Road.

“Observes that if no immediate remedial measure is put in place now pending total reconstruction the industries along the axis would be completely cut off from accessing raw materials from the Lagos seaports and transporting finished goods to and from Lagos and elsewhere.

“Deeply saddened that even as we speak, thousands of our people are in agonizing hardship as a result of the deplorable state of this critical infrastructure.”