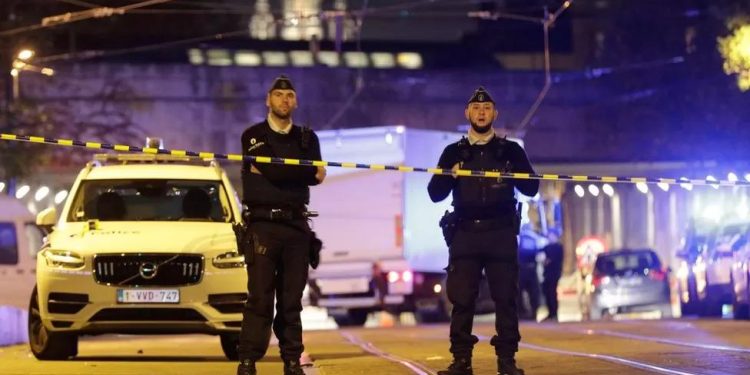 A police officer has died and another has been wounded in a knife attack in Brussels.

The two officers were taken to hospital after they were stabbed close to Brussels North railway station on Thursday evening.

The attacker’s motive is unknown, but anti-terrorist officials say they have taken over the investigation.

The two police officers were on patrol in the Schaerbeek area of northern Brussels on Thursday evening when they came under attack. The officer who was fatally stabbed in the neck was just 20 years old, Belgian media report.

Police say another patrol arrived at the scene and “neutralised” the attacker. He was shot in the legs and abdomen before being taken to the hospital. Initial reports that he had died have since been denied.

One local resident told the BBC they had heard “five or six shots” fired shortly after the attack, which occurred at around 19:15 (18:15 GMT).

“I was coming from work and I was on the phone with my dad and then I heard five or six gunshots,” the witness, named Kremel, said.

“My father asked me ‘what’s going on?’ I said it’s probably fireworks. He told me, ‘No, these are gunshots’.”

The motive for the attack is unknown but the public prosecutor later said that the suspect had entered every police station in the Schaerbeek area on Thursday morning, making incoherent remarks and speaking of hatred of the police.

He was escorted to a psychiatric unit for treatment but when police contacted the hospital later he had apparently left the hospital, the prosecutor said.

The suspect was reportedly on a list of potentially violent extremists.

In a tweet sending condolences to the dead officer’s family and friends, Belgium’s Prime Minister Alexander De Croo wrote: “Our police officers risk their lives every day to ensure the safety of our citizens. Today’s drama demonstrates this once again.”

“My sincere hope is that his hospitalised colleague will be well,” he added.

It was six years ago, but Brussels still bears the marks of a coordinated terrorist attack – at the main airport and on the metro – that killed 32 people in 2016.

In the coming weeks, nine alleged members of a cell of the so-called Islamic State group are due to go on trial for their involvement in the attacks.