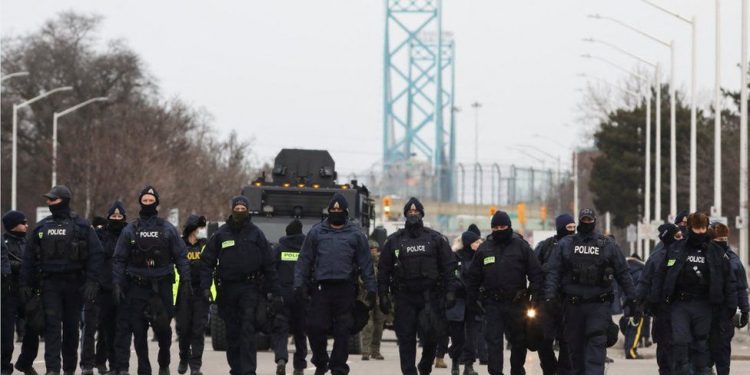 Police have cleared the remaining protesters blocking a key bridge between Canada and the United States, after a week of disruption.

Canada’s protests against Covid vaccine certification to cross the border have paralysed trade across the Ambassador Bridge in Windsor, Ontario.

A judge issued an order on Friday to break up the protest, but dozens of demonstrators remained in defiance.

Police have now cleared the road, though the bridge remains closed.

In a statement, police said Sunday’s action resulted in over a dozen arrests on a charge of mischief – which refers to damage or interference with property. Multiple vehicles were also seized, police said, none of the arrests became violent.

The clearing effort first began on Saturday morning, when many of the vehicles involved left peacefully on police orders. But as news of the police action spread, more protesters turned up, temporarily swelling the crowd.

But by Sunday morning, only a few dozen people remained, and police resumed their operation.

Within hours, only a small number of stragglers remained on the sidelines, though police vehicles, rather than protesters, continue to block off the road to the Ambassador Bridge.

Windsor police warned people to avoid the area of the bridge, tweeting: “Enforcement will continue in the demonstration area and there will be zero tolerance for illegal activity.”

Officials say they hope to reopen the bridge later on Sunday.