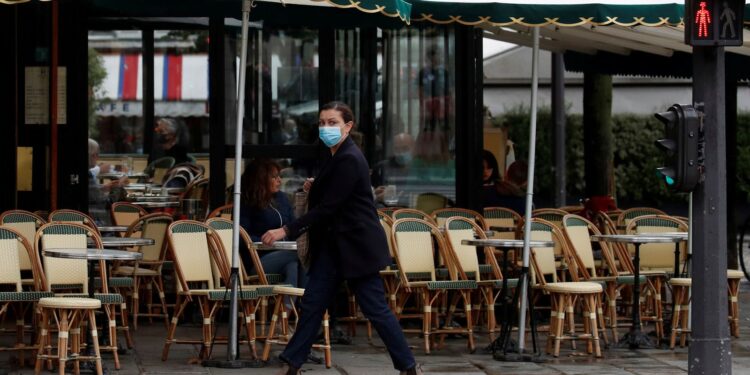 Curfews have been announced for several cities

The French president says people will not be allowed to go to restaurants or visit friends between 9pm and 6am in these areas.

A state of emergency has been declared in France, and President Emmanuel Macron has announced a curfew between 9pm and 6am for the areas worst-affected by coronavirus.

During the curfew hours, people will not be allowed to go to restaurants or visit friends – but there will be no restrictions on public transport or on people travelling within regions.

Anyone who is out during the curfew will need to have a good reason, the president said.

Further details will be announced on Thursday, including exemptions for those working during curfew hours.

Speaking on French television, Mr Macron said the situation was “worrying” but the country had not yet “lost control” of the pandemic. He did, however, say the country was experiencing a second wave.

Mr Macron went on to say that anyone breaking the curfew rules would be fined €135 (£122).

He also said there should be no more than six people around the table for family gatherings, although exceptions could be made for those with more than six in their immediate family.

“The message I want to send this evening is that I need each of you, we need each other, to find solutions,” he said.

“We will come out of this stronger, because we will be more united. We will get through this, together.”

The French government earlier said the public health state of emergency will begin at midnight on Friday.’This is what a second wave looks like’ in an intensive care unit

In a statement, the government said COVID-19 was a disaster which endangered the health of the population and justified the adoption of strict measures.

Areas under the maximum alert level have already had to close bars and restaurants are operating under restricted hours.

The move comes as the number of people in hospital with coronavirus in France has risen to more than 9,100 for the first time since the end of June.

The country reported 22,591 new daily cases on Wednesday, the third time in six days the daily total has surpassed 20,000.