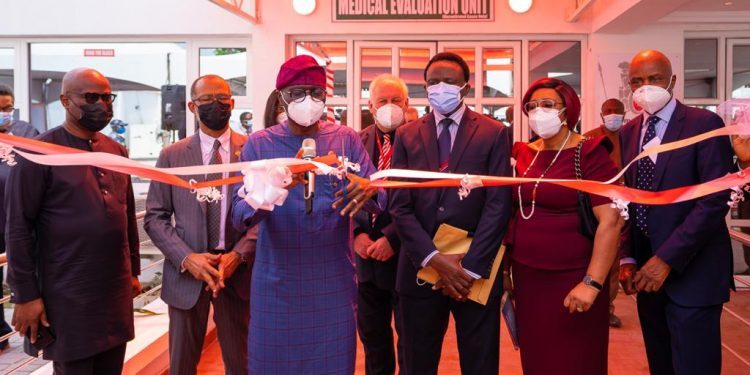 The Lagos State Governor, Babajide Sanwo-Olu, yesterday, commissioned a new isolation centre for the treatment of coronavirus infection in the state.

This is in line with measures to mitigate the spread of the Coronavirus in Lagos, which remains the epicenter of infections in the country.

The isolation centre, which is in Victoria Island part of the state, is a purpose-built medical facility equipped with ICU capacities in response to the global COVID-19 pandemic.

The governor assured Lagosians that his administration will not backtrack on public health deliverables.

The Armoured Shield Isolation Centre was set up by Reddington Group in Lagos to assist the state government in the fight against COVID-19.

The Armoured Shield Medical Complex and its Command structure is situated in four different locations across Lagos with an Incident Command Office in Victoria Island.

It is the only private hospital group in Lagos with in-house facility for PCR testing, ambulance response, CT scan, isolation care, hospital care with Level 3 ICU capacity for COVID-19 treatment.

The Lagos government in December 2020 announced that the state is in the second wave of the coronavirus infection as positive cases recorded in the state were on the rise.

To forestall the spread of COVID-19, which is regarded more transmissible and deadlier than the first wave, Lagos State issued fresh directives, including the closure of schools, clubs and event centres.

The commissioning of the new centre is part of the strategies by the state government in combating the pandemic.

“We are going through the second wave of COVID-19 pandemic and we cannot stop the advocacy. We cannot stop talking about it. Some people thought coronavirus is for some set or type of people; it knows no race, no religion, no economic status.

“For us as a government we have continued to heighten and raise the level of our preparedness. Over the last four, five months, we have been building oxygen centres; we have about 10 of them at our secondary facilities and we have commissioned about five of them now,” the governor said.

Sanwo-Olu also commended Reddington Group for putting up the Armoured Shield Isolation Centre, saying the good gesture is a plus for public and private sector collaboration.

“This isolation centre is important for us as a government because it is a clear demonstration of power of collaboration between the public and private sector and ensuring that we cannot do it all by ourselves. And when public issues arose and private sector raises up to such occasion, the least we can do is to encourage them,” he said.

The governor added that the state “has recorded thousands of cases of COVID-19 infection over the last 10 months and had strategies to curtail the spread of the virus”.

Speaking at the commissioning, the Chairman of Reddington Hospital Group, Yomi Onabowale, commended the governor in the handling of the first wave and expressed confidence in his battle against the second wave.

“I want to commend Governor Babajide Sanwo-Olu, the Incident Commander for Lagos State. He has done extremely well in leadership, especially in Lagos State in battling the first pandemic and in ensuring that Lagos was safe. And I have no doubt that he would rise again to meet this current challenge,” he said.