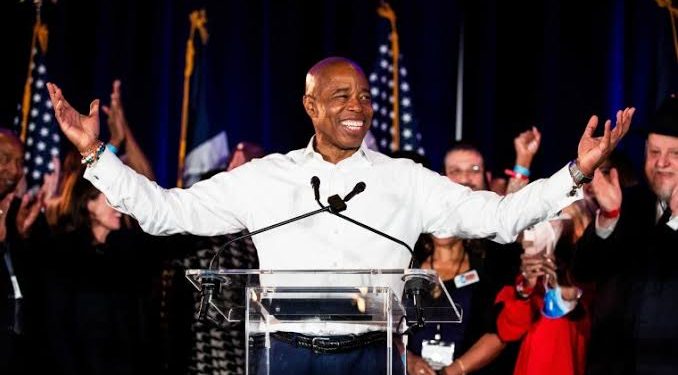 Mayor-elect Eric Adams said Thursday that he plans to receive his first three paychecks as mayor in the form of Bitcoin, the increasingly popular digital currency, to show his commitment to making New York City the hub of digital finance.

Adams, fresh off a landslide victory in the city’s general mayoral election, made the promise after Miami’s mayor, Francis Suarez, expressed his intention to take his next paycheck in Bitcoin.

“In New York we always go big, so I’m going to take my first THREE paychecks in Bitcoin when I become mayor,” Adams said on Twitter, responding directly to Suarez, a Republican. “NYC is going to be the center of the cryptocurrency industry and other fast-growing, innovative industries! Just wait!”

It wasn’t clear if it would be possible for Adams to access his initial paychecks through Bitcoin after he takes office Jan. 1. Michael Greenberg, a spokesperson for the city’s Office of Management and Budget, said he wasn’t sure about the viability of the proposal and deferred further comment to another spokesperson, who did not immediately respond.

But the gesture from Adams, the Brooklyn borough president, seemed symbolic — less about the nuts and bolts of changing the city payroll options, and more about signaling that New York is open to business for tech innovators.

Adams has promised that the city will “no longer be anti-business” under his administration, seeking a shift in tone from Mayor Bill de Blasio’s often frosty relationship with financial leaders.

Investors have flocked to Bitcoin, the world’s first cryptocurrency, over the past year. Its stock value has increased by more than 400%.

But critics have questioned the poorly understood currency, noting long wait times for Bitcoin transactions and questioning its true value. And it has also often been associated with illicit activity.

In Miami, Suarez has boosted his profile — and his city — with his pivot toward cryptocurrencies. This year, the city hosted the world’s largest cryptocurrency conference, and it has netted more than $7 million from the rollout of a cryptocurrency called MiamiCoin, The Washington Post reported in September.

Evan Thies, a spokesperson for Adams, said the mayor-elect’s plan is to convert his check, and then look into making Bitcoin an option for other city employees.

“Touché,” Suarez tweeted in response to Adams on Thursday, “congrats on the election and I look forward to the friendly competition in making our respective cities a crypto capital!”