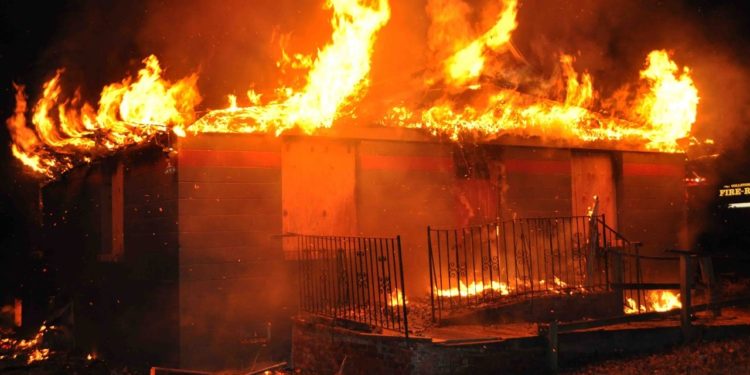 The palace of Monarch of Isheri-Olofin, Oba Wahab Balogun, in the Isheri, Idimu area of Lagos State was on Sunday gutted by fire, leaving one of the rooms razed and a man choked.

According to reports, the fire started in a bedroom in an eight-bedroom bungalow in the palace when electricity was restored.

Although the yet-to-be-identified man got choked, it was gathered that he was rushed to a nearby hospital, where he is being treated.

Emergency responders arrived the scene to combat the inferno as residents joined efforts to curtail it from spreading.

The Lagos State Emergency Management Agency (LASEMA) Spokesman, Nosa Okunbor, said the fire razed one of the rooms in the palace.

He noted that the inferno had been completely extinguished. “Upon arrival at the palace of the Oba of Isheri-Olofin, it was observed that a room in an eight-bedroom bungalow inside the palace was gutted by fire.”

“Further investigation revealed that the fire was as a result of electrical surge when power was restored,” he revealed.

According to Okunbor, the team conducted post-disaster assessment with some palace officials present, stressing that there is no threat of re-ignition.

Lagos Police Shut Down Hotel over Mysterious Death of Guest