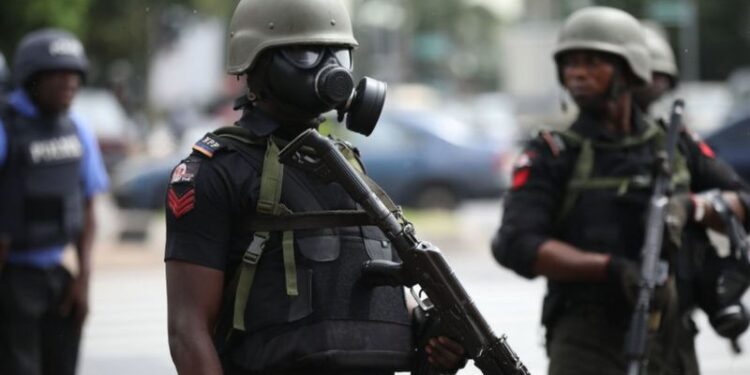 In its bid to ease vehicular and human movements in Oshodi and its environs especially in the ember period, the Lagos State Environmental and Special Offences Unit (Taskforce), has impounded over 100 vehicles at unauthorised locations and bus-stops in the areas.

Chairman of the agency, CSP Shola Jejeloye who disclosed this on Sunday, at the Agency’s headquarters in Bolade-Oshodi warned members of the public to be wary of criminals who have devised new tactics.

He said the vehicles were confiscated in the early hours of Sunday during simultaneous enforcement exercises at Oshodi Bus Terminals, Akinpelu, Ishola street and Makinde axis.

According to him, the over 100 vehicles used for commercial and private purposes were impounded for various traffic offences including obstruction of free flow of traffic, picking and dropping of passengers at unapproved bus-stops.

The Chairman said the exercise was to checkmate the unbecoming attitudes of some motorists as it is no longer business as usual for anybody who obstructs free flow of traffic in the area. He said, “Commercial motorists popularly known as Danfo drivers have been warned on several occasions to desist from flouting traffic rules in the State but they end up doing the exact opposite when you look away.

“Their actions have an effect on both pedestrians and vehicular movements in and around this axis that is why we are going to be more firm with our enforcement exercises with them this ember period.

“I have said it before and will say it again that it will no long be business as usual,” said the Chairman.

Jejeloye decried the manner in which private vehicles also emulate their commercial counterparts thereby compounding the issues on ground through their road usage.

He warned them about the effects their actions have on Lagosians and appealed to them to do the right thing or risk having their vehicles impounded.

“We have impounded over 100 vehicles today for parking indiscriminately and obstructing the free flow of traffic and we will ensure that anyone caught after this would face the sanctions of DNR (Do Not Release) until the court rules otherwise. To be fore warned is to be fore armed,” Jejeloye stated.

The Chairman also sounded a note of warning to miscreants and hoodlums who lurk around Oshodi and other parts of the State, and have devised new means of dispossessing unsuspecting individuals of their belongings, stating that they risk jail term if caught by officials of the Agency.

CSP Jejeloye called on traders who display their wares by the road side to heed the warnings of the State Government or have their goods confiscated. He referred to the several meetings he had with them in previous months on the need for them to move their activities into the market complex in order to create adequate space on the roads for free vehicular movement.

“No stone will be left unturned this time around until traffic impediments on our roads are completely removed. Enforcement exercises will be doubled till motorists and traders tow the line of best practices in ensuring that the roads are free and motorable for all,” he said.

Reeling out other achievements of the Agency withing the week, he said some suspects were arrested from different parts of the State for crimes ranging from fraud to vandalism and land grabbing to mention but a few.

“The suspect, Adeshola Abiodun, 37, transferred the funds meant for other purposes and also generated fake receipts to the victim before being investigated and consequently arrested by the Lagos State Taskforce and charged to court.”

In addition to the aforementioned feats attained by the Agency, the Chairman said cable vandals who have been on the radar of the Agency for quite a while were apprehended along Obafemi Awolowo Road where they had excavated armoured cables of over 200 metres cut to smaller pieces.

“The Lagos State Electricity Board who had made reports to the Agency concerning the activities of vandals in the State were able to breathe a sigh of relief after the suspects were apprehended and cables recovered. They have also been charged to court to answer for their crimes.”

Similarly, he said some suspected land grabbers were neutralised in Lekki and other parts of the state.

He capped it all by saying the suspects have all been charged to court and sentenced accordingly to serve as deterrent to others who may be nursing the idea of going to such inhumane business.