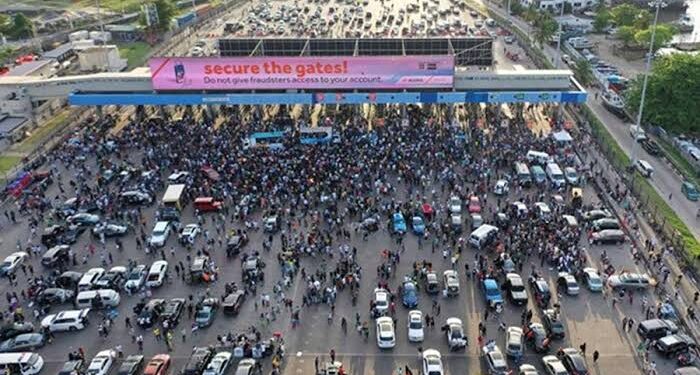 The Lekki Concession Company, LCC, has debunked claims that it removed the CCTV Cameras at Lekki tollgate few hours before the shooting of protesters on Tuesday.

Images of an LCC staff with some equipment had circulated on social media, with claims that he was sent to remove the CCTV at the tollgate after Governor Babajide Sanwo-Olu imposed a 24-hour curfew on Tuesday.

Reacting, LCC in a statement signed on Wednesday, said it had cooperated with the protesters and did not remove the CCTV.

Condemning the shooting, LCC maintained that the CCTV is still installed and there was no instruction from anyone to remove them.

It further revealed that during the protest, some of its equipment were stolen.

“LCC has cooperated with the protesters from the onset, identifying with the cause and need to end the police brutality. We provided lights, toilets among other items to the youths as a show of solidarity.

“As the protest progresses, our tolling equipment were being looted. We recovered items daily with the help of some of the protesters. Such items included air conditioners, violation alarm bells, monitors, keyboards etc.

“On the 20th of October, we received feedback that some of the rolling equipment were being pulled off, hence we went into the lanes to recover more items including analogue BOSCH tolling devices used to monitor transaction carried out in the toll lanes.

“We sincerely regret this unfortunate incident and once again condemn the shooting of unarmed protesters at Lekki tollgate and other locations in the state,” it added.