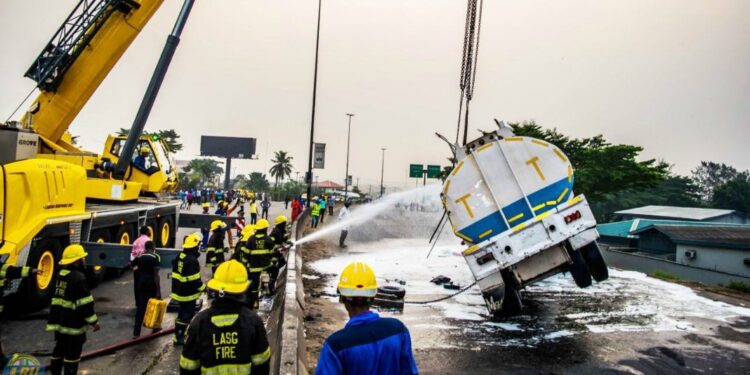 Residents in the Aso-Odo area of Badagry in Lagos  threw caution to the wind, today, as they were seen scooping petroleum product from the scene of a fallen tanker.

The incident reportedly occurred in the morning as the tanker laden with 33,000 litres petrol tanker overturned and fell on the road.

An eyewitness said despite the presence of security operatives in the area, the residents scooping the fuel continued unabated.

However, the Chief Executive Officer, Lagos State Emergency Management Agency LASEMA, Dr Olufemi Oke Osanyintolu said the agency’s attention has been drawn to the incident and an emergency response plan has been activated.

He urged members of the public to be law abiding saying, “our attention has been brought to the tanker incident along Aso-Odo Road, Badagry. Emergency response plan has been activated.

“Members of the public are cautioned to cooperate with responders and to keep away from the scene and refrain from scooping petrol as this could cause a secondary incident.”