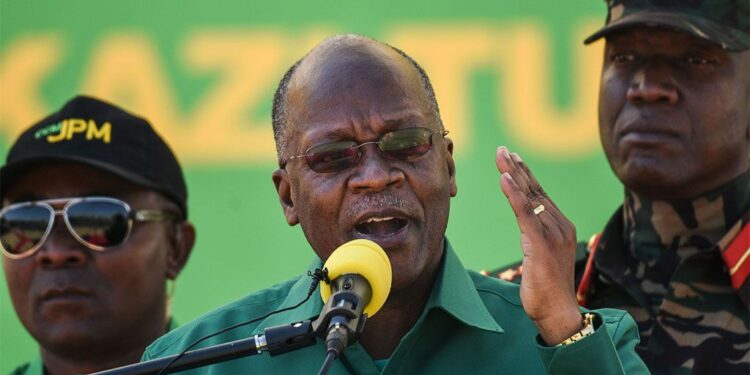 President John Magufuli claims, without evidence, that vaccines against COVID-19 are ‘dangerous’.

Tanzanian President John Magufuli has claimed that vaccinations against COVID-19 are dangerous and instead urged Tanzanians to protect themselves from the deadly disease by using domestic measures including steam inhalation.

Magufuli has long downplayed the seriousness of COVID-19, which has killed more than 2.1 million people worldwide. He has previously questioned the efficacy of imported COVID tests and urged people to pray to protect themselves from the coronavirus.

The president has resisted imposing strict lockdowns to contain the virus and his government has faced criticism over its secrecy regarding the outbreak in the East African nation, which has not published official COVID-19 statistics for more than six months.

He also urged the health ministry to be cautious with vaccines developed abroad.

The president offered no evidence to support his doubts about the safety of vaccinations, which are being administered across more than 50 countries, according to Our World in Data, after securing regulatory approval.

A microbiologist who requested anonymity citing fear of government retaliation described the president’s statement as “dangerous” and said could help to reverse the country’s decades-long effort to eradicate preventable illnesses through vaccines.

“The fight against COVID-19 needs informed public health measures. Denial, misinformation and inaction only puts Tanzanian citizens, especially the vulnerable ones, at unnecessary risk of serious illness or death from COVID-19,” the scientist told Al Jazeera.

Magufuli’s warning comes a day after the Tanzania Catholic Church issued an alert over a surge in suspected COVID-19 infections in the country. In a letter addressed to church leaders, the president of the episcopal conference (TEC) warned of a possible new wave of infections.

The TEC Secretary Father Charles Kitima told the media that the Catholic Church had noticed an unusually sharp increase in the number of funeral services being held. He said that usually, there would be one or two requiem masses per week in urban parishes, but that now they were conducting the masses daily.

Since the apparent resurgence of cases in recent weeks, Magufuli has sent mixed messages to the public, at times urging people to follow expert advice but also mocking those who wear masks to slow the spread of the virus.

Despite anecdotal evidence suggesting a potential resurgence of infections, there are no official figures to indicate how widespread it might be, as the health ministry stopped releasing regular updates on COVID statistics last April.

Tanzania has reported 509 COVID-19 infections and 21 deaths in total, according to World Health Organization data.