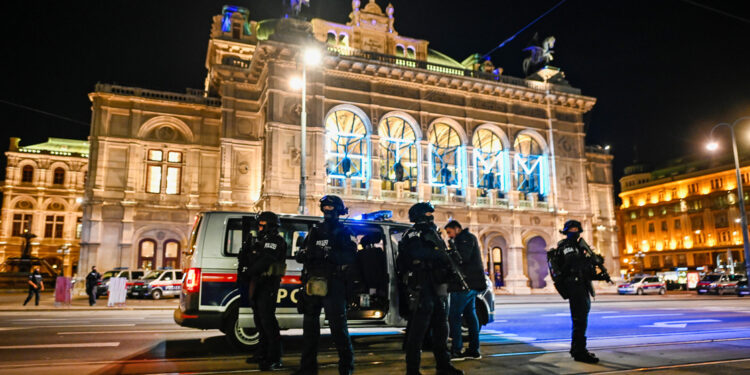 Austrian police have carried out a series of raids and made 14 arrests after a gunman murdered four people in the heart of Vienna on Monday.

The man, described as a 20-year-old Islamist terrorist who had been freed from jail last December, was shot dead by police as he fired on passers-by.

Security has been tight in the Austrian capital as police launched a manhunt for any further attackers.

But authorities now believe the gunman may have acted alone.

Austrian Chancellor Sebastian Kurz said the four who died were an elderly woman, an elderly man, a young man and a waitress. Another 22 people were wounded.

One of the women who died was German, Germany’s foreign minister said.

Interior Minister Karl Nehammer said there was no indication that a second assailant had been involved, though that could no be ruled out. Police were still assessing some 20,000 mobile phone videos of what happened.

The Islamic State (IS) group claimed in a video on its online propaganda channel that it was behind the attacks, without providing any evidence.

The attacks began at 20:00 (19:00 GMT) on Monday, opposite the main synagogue in a pedestrian alley called Seitenstettengasse, and continued until the gunman was shot dead at 20:09.

Police identified a total of six crime scenes in the area. It was clearly an attack driven by “hatred of our way of life, our democracy”, Chancellor Kurz said.

Three days of national mourning have begun, with flags flying at half mast. Children – those in Vienna were kept at home for safety on Tuesday – will observe a minute’s silence at school on Wednesday.

The UK raised its terrorism alert level to “severe”, from “substantial”, meaning an attack is highly likely, but no specific intelligence points to one.

It has also emerged that a police officer who was shot and wounded by the gunman was taken to safety by two men of Turkish descent.

“I took his legs, he took his shoulders, the police were there too of course and helped, and we quickly got him to the ambulance,” Mikail Özen, a personal trainer and mixed martial arts fighter, told journalists.

Mr Nehammer praised them, saying “more than ever: if people think that they can divide our society with violence, terror and fear it’s important to stand together”.

He said 14 people linked to the gunman had been arrested in the Vienna area, the town of St Pölten and the city of Linz.

Two Swiss citizens – men aged 18 and 24 – were also arrested in Winterthur near Zurich, suspected of links to the gunman.

What we know about the gunman

Earlier, Mr Nehammer described the gunman as an “Islamist terrorist” named Kujtim Fejzulai, who had been jailed for 22 months in April 2019 for trying to travel to Syria to join IS jihadists.

He was released early in December under more lenient terms for young adults, after convincing the authorities that he no longer held extremist Islamist views, Mr Nehammer said.

Originally from North Macedonia, he had both Austrian and Macedonian citizenship. He had posted a photo on a social media, showing himself with weapons, before the attack, the minister said.

Police searched his home and seized video material. As well as being heavily armed, he was wearing a fake explosive belt, police said.

Mr Nehammer said the gunman opened fire with a shortened Kalashnikov assault rifle, but was also armed with a machete and a pistol.

The attack came hours before Austria imposed new national restrictions to try to stem rising cases of coronavirus. Many people were enjoying having a drink or eating out before a midnight curfew.

Last month French history teacher Samuel Paty was beheaded outside a school in a suburb of Paris by a Chechen youth, who was then shot dead by police.

As the French government launched new measures to tackle militant Islam, a Tunisian man fatally stabbed three people in a cathedral in Nice.

The worst IS attack in Europe in recent years was in November 2015, when gunmen killed 130 people in Paris.

Other Islamist terror attacks in Europe

Mar 2019: Four people killed and two seriously wounded by gunman on a tram in the Dutch city of Utrecht

Aug 2017: A van attack is launched on pedestrians in Barcelona, and another attack in the Catalan coastal town of Cambrils. Sixteen people killed, more than 130 injured

May 2017: A bombing at a pop concert in Manchester, England, kills 22. Then in early June eight people are killed and dozens injured in a van and knife attack in central London

Jul 2016: A gunman drives a large lorry into a crowd celebrating Bastille Day in Nice, killing 86 people – attack claimed by IS.

US Election 2020: Joe Biden says 'we're on track to win' but Donald Trump insists 'they are trying to steal the election'