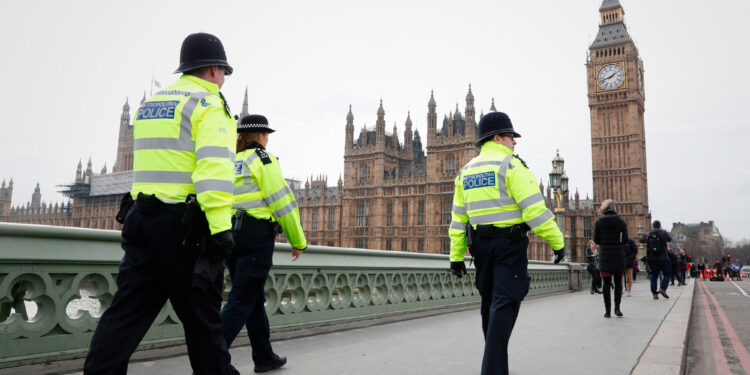 The UK’s terrorism threat level has been upgraded from “substantial” to “severe”.

The move means security chiefs believe that an attack is highly likely but there is no specific intelligence of an imminent incident.

The move follows Monday night’s shooting in Vienna in which four people died.

Last week, three others died in a knife attack in Nice, France, and a teacher was murdered in Paris last month.

Home Secretary Priti Patel said the British people should be “alert but not alarmed”.

“This is a precautionary measure following the horrific events of the last week in France and last night in Austria and is not based on a specific threat.”

She added that significant steps had already been taken to amend powers and strengthen the tools for dealing with developing terrorist threats.

“As I’ve said before, we face a real and serious threat in the UK from terrorism.

“I would ask the public to remain vigilant and to report any suspicious activity to the police,” she said.

Assessments of threat levels are taken by the Joint Terrorism Analysis Centre (JTAC), part of MI5, which makes its recommendations independently from the government.

The five levels of threat set by the JTAC are:

‘A sense of inevitability’

The decision to raise the threat level back to “severe” has a certain sense of inevitability about it.

While the threat level may feel vague to the public, what lies behind it is an assessment of available intelligence on known suspects targeting the UK and a wider analysis of how international events will play into their intentions.

Whenever there is an attack that leads to loss of life, there are plotters who will regard that as a success to emulate.

They will be encouraged to go further themselves. That is why a string of events elsewhere – such as France and Austria at the moment – carry weight in the UK’s planning and preparedness.

In public, there are likely to be subtle changes to visible policing – particularly around public locations thought to be at risk of attack.

Additional advice may be given confidentially to some organisations that could be vulnerable.

And behind the scenes it will mean that counter-terrorism investigators will be taking a very close look at some of their highest current priorities and asking whether these individuals have been emboldened to turn talk into violence.

Head of UK counter-terrorism policing Assistant Commissioner Neil Basu echoed the home secretary’s comments, saying there was no intelligence to link any of the attacks in France or Austria to the UK but said his officers were working with international partners, and providing assistance.

He urged communities to “stand together and reject those who seek to sow division and hatred between us”.

“We need communities and families to bring to our attention anyone they perceive may be vulnerable, a danger or escalating towards terrorism,” he said.

He said the public could expect to see additional police officers deployed to certain places and locations over the coming days.

Police would also work closely with local businesses, faith groups and community groups to provide reassurance and seek their support, he added.

Labour’s shadow home secretary Nick Thomas-Symonds said the decision to change the threat level should not cause “undue alarm” but showed the importance of people continuing to be vigilant.

The UK’s terrorism threat level was raised to the highest rating, “critical”, in the days following the Manchester Arena bombing in May 2017.

It last reached that level again briefly in September that year, after a bomb partially exploded on a Tube train at Parsons Green.

The threat level remained at the second highest rating, “severe”, until last November when it was downgraded to “substantial”, where it has stayed until now.

BBC security correspondent Frank Gardner said given events in Austria and France, it would have been “remiss” of the government not to raise the threat level.

He said the JTAC, which brings together analysts from across transport, health, intelligence and the military, were constantly analysing the ongoing threat to UK citizens anywhere in the world, and will have looked at what has happened in Vienna and at all the postings from al-Qaeda and the Islamic State group, encouraging people to carry out attacks.

“There’s a lot of anger at the moment in many parts of Muslim communities over the cartoons [of the Prophet Muhammad] and that’s being exploited by extremists who are encouraging people to carry out attacks, hence the raising to severe.”