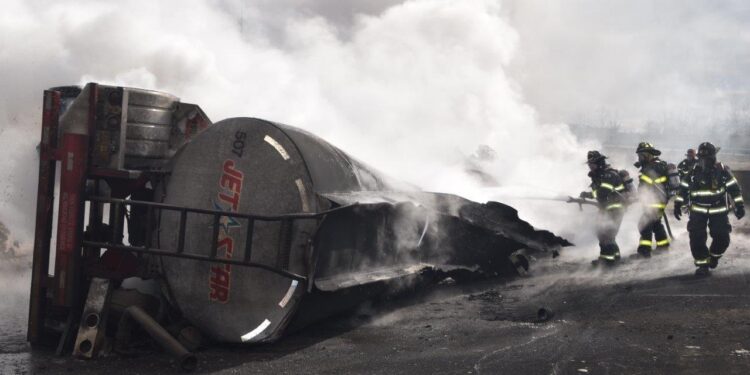 Meanwhile, officials of the Federal Fire Service were said to have arrived the scene and swung into rescue operations.

While the rescue operation went on, men of the Federal Road Safety Corps (FRSC) helped to control traffic.

“The FRSC is admonishing motorists who have reasons to use the road should seek an alternative, for now, to allow the personnel of Fire Service on ground to extinguish the fire.”

He recommended alternative routes for those moving out of Lagos to use Victoria Island by Ajah to Ijebu Ode to continue their journey.

“The Lagos-Abeokuta Expressway to the Sagamu Interchange is another alternative that motorists can use at the moment,” he stated.

According to a tweet by the DG/CEO LASEMA, Dr Olufemi Damilola Oke-Osanyintolu, on Sunday night, the inferno has been extinguished with the combined efforts of the Lagos Fire Service, LRU fire and other stakeholders (UBA Fire, Julius Berger Fire team) due to the magnitude of the inferno.
He stated, “Two persons were rescued alive, one with minor injuries whilst the incident recorded two fatalities, one body recovered and the other charred to the bones (this will be sent for pathology test). Recovery operation has been concluded and we hope that traffic flow should ease.”