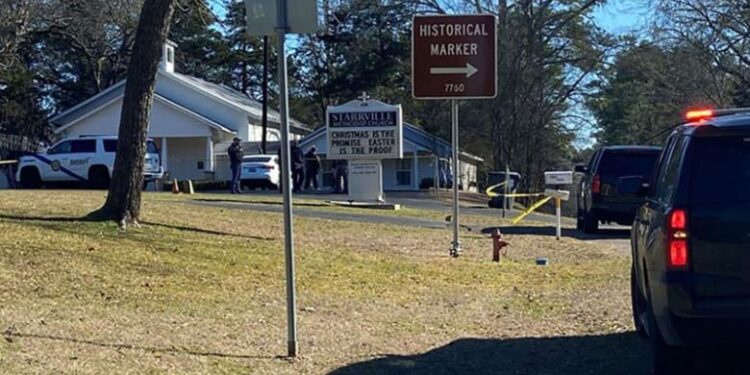 The scene of a shooting at Starrville Methodist Church in Winona, Texas, on Sunday, January 3, 2021.

A man suspected of killing a pastor in a Texas church shooting Sunday was found hiding from police in the church bathroom shortly beforehand, Smith County Sheriff Larry Smith said.

He ended up at the Starrville Methodist Church in Winona, about 100 miles east of Dallas.

On Sunday morning, the pastor of the church discovered a man in the bathroom holding a red bank bag that belonged to the church.The pastor drew his firearm and ordered the suspect to stop, Smith said. The suspect moved toward the front door, then lunged, disarmed, and fatally shot the pastor.

Two people were also injured — one from a gunshot wound, and another from falling. The surviving gunshot victim was in surgery Sunday, and his condition is unknown, Smith said.

The suspect fled the scene in a stolen vehicle belonging to the pastor and was pursued by a Harrison County deputy who was able to disable the vehicle and take the suspect into custody, Smith said.

The suspect was headed to a Tyler-area hospital be treated for a gunshot wound to his left hand.The case will be investigated as a capital murder and presented to the Smith County District Attorney’s Office, Smith said.

“Our hearts are with the victims and the families of those killed or injured in this terrible tragedy,” Abbott said.

“I am grateful for the law enforcement officers who apprehended the suspect, and I ask Texans to join Cecilia and me in praying for those affected by this horrific shooting. The State of Texas is working closely with first responders and local officials to ensure that justice is served and that the Starrville community has the resources it needs during this time.”