Afghanistan: Secret Kabul talks between CIA and Taliban – US media 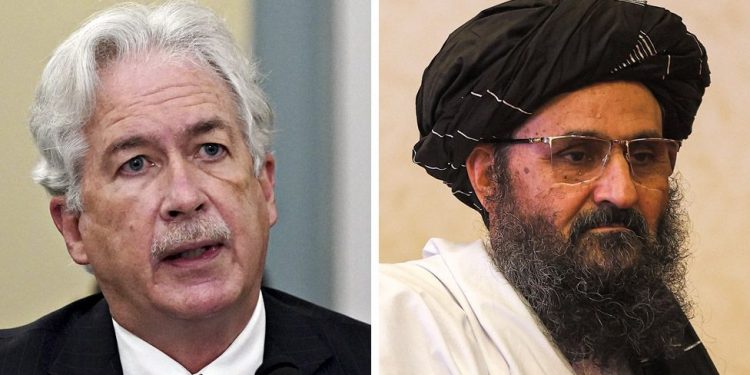 The head of the US Central Intelligence Agency (CIA) secretly met the leader of the Taliban in Kabul on Monday, sources have told US media.

Neither the Taliban nor the CIA would confirm the reported meeting between William Burns and Mullah Baradar.

US President Joe Biden has set a deadline of 31 August for American forces to leave Afghanistan. Allies – including the UK – want an extension.

US forces have been in Afghanistan since 2001, following the 9/11 attacks.

Sources have told US news outlets, including the New York Times, the Washington Post, the Associated Press and broadcaster NPR about the CIA-Taliban meeting.

However, they gave few details.

If confirmed, this would be the highest-level contact between the US and the Taliban since the militants took Kabul on 15 August, prompting the internationally backed Afghan government to flee.

About 5,800 US troops are currently guarding Kabul airport as thousands of foreign nationals and Afghans try to leave the country.

The Washington Post says the discussions are likely to have involved the deadline for the US military to conclude its airlift.

Also on Tuesday, the Taliban said no more Afghans would be allowed to leave the country, nor would the deadline for the US withdrawal be extended.

Mullah Baradar is one of the four men who founded the Taliban in 1994. He was captured in a US-Pakistani operation in 2010 and spent eight years in prison.

Since 2019, he has been the head of the Taliban political office in Qatar. In February 2020, he signed the Doha agreement on the withdrawal of US and Nato troops.

He was also the first Taliban leader to communicate directly with a US president, after having a telephone conversation with Donald Trump in 2020.