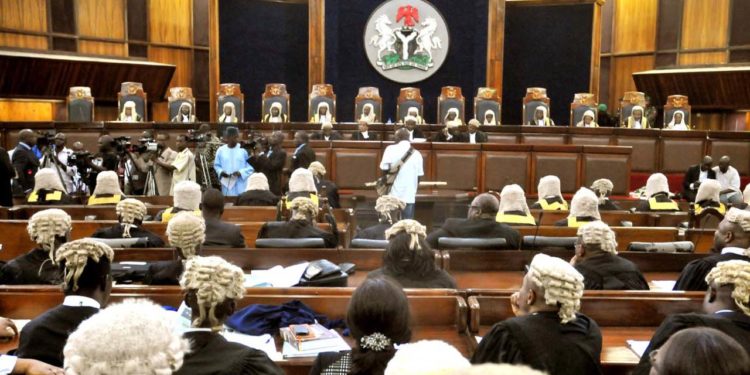 A fundamental principle underlying Nigeria’sconstitutional process is the independence of the judiciary. This embodies the entire philosophy of constitutional democracy which is more emphasized by the preamble to the Constitution which reads in part,“promoting the good government and welfare of all persons … on the principles of Equality, Freedom and Justice”. In a country characterized by socio-political and economic underdevelopment, a workable contrivance (separation of powers) which insulates the judiciary from undue interference from the other two arms of government, particularly in the appointment of Judicial Officers, must therefore be desirable.

The Nigerian Supreme Court is the highest Court in the judicial hierarchy. It is clothed with original and appellate jurisdiction as enshrined in the Constitution of the Federal Republic of Nigeria, 1999 (as amended). Decisions made therein are final and cannot be appealedagainst unless where there are omissions in its judgmentor clerical errors, which is not considered an appeal.Judicial appointments to the Supreme Court are therefore an important part of the administration of civil and criminal justice system in Nigeria. Judicial Officers also consider appointments to this Court as the peak of their careers.

As a policy and Court of last instance, the Nigerian Supreme Court has been criticized for the wanton delay in dispensing justice. For instance, the decision on an appeal may span a period of 2-4 years from the date of filing such appeal to determination. This is, obviously not because the Justices are lazy but because the Court is overwhelmed with far more cases its serving Justices can accommodate. Put simply, the Supreme Court currently runs with far less than its constitutionally prescribed number of Justices, and this has been the state of things for many years.

Section 230(2) of the Constitution provides that “the Supreme Court of Nigeria shall consist of –(a) the Chief Justice of Nigeria; and(b) such number of Justices of the Supreme Court, not exceeding twenty-one, as may be prescribed by an Act of the National Assembly.”

It means therefore that the Apex Court should ordinarily have 22 Justices of the Court including the Chief Justice of Nigeria (CJN). I cannot recall when last the Court could boast of this number of sitting Justices at any one time. This must impinge on the speed of delivery and administration of civil and criminal justice in Nigeria.

The undue delay in appointments to the Supreme Court and its untold effect on the administration of justice in Nigeria has therefore called for a review of Section 231 (1) and (2) of the Constitution. The section provides that such appointments shall be made by the President on the recommendation of the National Judicial Council (NJC) upon confirmation of such appointment by Senate.

A more careful review of this section makes it unclear what it seeks to achieve. Or put it in another way, the Constitution makes it clear that in its bid to enshrine the doctrine of separation of powers, the judiciary is at the mercy of a ‘cooperative or uncooperative Executiveand Legislature’. No one is appointed to the Supreme Court unless the President says so.

Sometimes in October 2019, the NJC (the highest decision making organ) recommended their Lordships Adamu Jauro (North-East), Emmanuel Agim (South-South), C. Oseji (South-South) and Helen M. Ogunwumiju (South-West) for appointment to the Supreme Court.  Eight months after, the President has refused to consider this recommendation, nor has he forwarded the names to the Senate for confirmation. Were the President to have done so, this would have made the number of Justice of the Supreme Court, sixteen. This is still below the twenty-two constitutionally approved number. The retirement age of a Justice of the Apex Court is seventy years old.

It is important to note that the President has no other discretion to exercise upon recommendation to him of a candidate for the position of JSC than the appointment of such person. The President’s power to appoint is circumscribed by the recommendation made to him by the NJC. In simple terms, NJC recommends, President appoints, and Senate confirms. The case of  Hon Justice Dongbam-Mensem, who was appointed in acting capacity on March 5, 2020 following the retirement of Hon. Justice Bulkachuwa and on the recommendation of the NJC, in compliance with the provisions of Section 238(4) and (5) of the 1999 Constitution (as amended) is apposite. This procedure is therefore not alien to the Executive.

The expectation, and indeed the standard of the NJC (particularly on the appointment of Justices of the Supreme Court) has always been to thoroughly screen candidates through a transparent process of interviews by the Federal Judicial Service Commission, which then reports to the NJC on its findings with regards to every candidate it interviews and screens. The NJC then forwards the name of successful candidates to the President for appointment.

Put simply, where a President fails to make an appointment pursuant to a recommendation by the NJCwithin a certain period, the law should grant the NJC the liberty to submit such name(s) to Senate for confirmation by simple majority or two-thirds majority. This will deem the President’s approval as having been sought.

The President has to do the right thing, and appoint, with dispatch, the candidates recommended to him by the NJC.