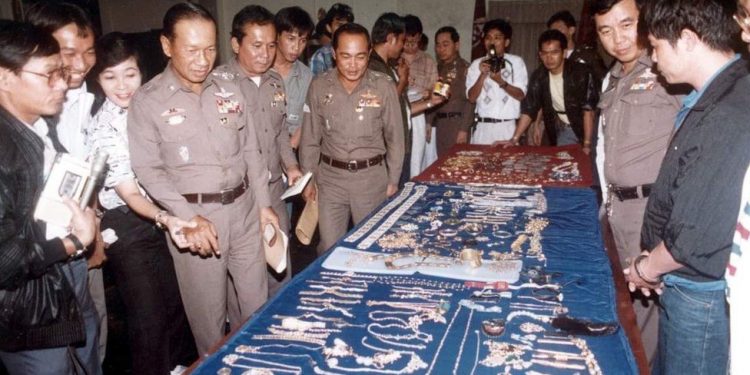 Saudi Arabia and Thailand have ended a 30-year row over a scandal involving stolen jewels and a string of murders.

The resumption of full diplomatic ties came during a visit to Riyadh by Thai Prime Minister Prayut Chan-ocha.

A Thai cleaner working for a Saudi prince took the gems in 1989. A rare 50 carat blue diamond was never recovered.

Three Saudi diplomats were shot dead in Bangkok following the theft. Several top Thai policemen were implicated in the affair but never convicted.

The deal opens the way for Thais once again to find employment in Saudi Arabia, which says it needs millions of overseas workers.

It will also allow renewed co-operation in areas such as tourism and petrochemicals. Saudi Arabian Airlines has announced it will restart direct flights to Thailand in May.

Relations between the two countries were downgraded after Thai cleaner Kriangkrai Techamong stole the jewels from his employer Prince Faisal, the eldest son of King Fahd of Saudi Arabia.

Kriangkrai sold them back in Thailand without realising their real value.

Then, a year after the theft, three Saudi diplomats in Thailand were shot dead, and an investigator sent there to track the missing jewels disappeared. Two Thais linked to the crime also died in suspicious circumstances.

Kriangkrai the cleaner and one police officer were the only two individuals jailed over the affair.

Saudi Arabia accused the Thai police of a bungled investigation, amid allegations the stolen jewels were acquired by senior officers. In 1994, the then Saudi charge d’affaires said the murdered diplomats had been “silenced”.

Thai Prime Minister Prayut Chan-ocha’s landmark visit to Saudi Arabia is the highest-level contact between the countries since the bizarre and embarrassing scandal, the BBC’s Jonathan Head reports from Bangkok.

In a joint statement, the prime minister expressed “sincere regret over the tragic events in Thailand between 1989 and 1990”.

Analysts say the dispute has cost billions of dollars in trade, and led to job losses for tens of thousands of Thai migrant workers. Before the scandal, as many as 300,000 Thais were employed in Saudi Arabia.

Most of the jewels were never found. The scarcity and value of blue diamonds is in part down to the fact so few places in the world mine for them.

The stones get their colour when the chemical boron is present during formation.

The origin of the Saudi blue diamond is unclear and no known photographs of it exist.