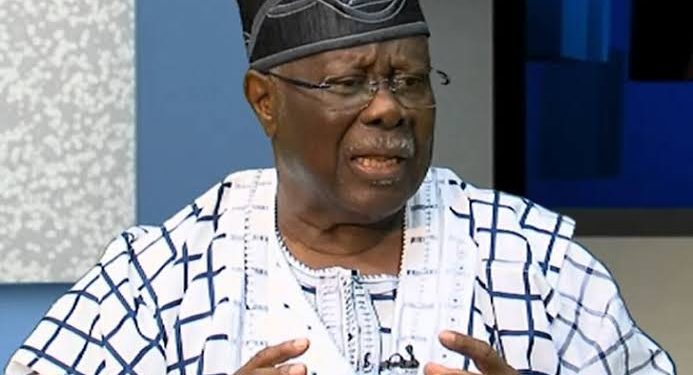 Chief Olabode George, a for­mer Deputy National Chair­man of the Peoples Democratic Party (PDP) has laid the blame for the perennial clashes by street urchins in Lagos Island on the doorsteps of Lagos State Governor, Babajide San­wo-Olu.

Recall that two persons were killed last week when rival gangsters of the Nation­al Union of Road Transport Workers (NURTW) clashed in the Idumota area of Lagos State between hoodlums from Idumota, Balogun, Martins, Kosoko and Oluwole areas of Lagos Island.

The clash affected trading and other commercial activi­ties while the Lagos State gov­ernment also placed a ban on NURTW activities.

Speaking in an interview, George who was born in Lagos Island said many youths have taken to thuggery and are join­ing the NURTW because of a lack of jobs and the failure of the state government to create skill acquisition programmes for them.

He said, “Lagos Island is where I was born and I also grew up there. The difference between my time and now is like day and night. What has the government of Lagos done to assuage the pains of these young people?”.

“There was a programme under former President Good­luck Jonathan that they call skill acquisition programme. It was specifically targeted at and designed for youths”.

“Whatever skills you want to learn, maybe tailoring, hair­dressing, carpentry, shoemak­ing and so on, the government will advertise, people apply and the government trained them at the Federal Institute of Industrial Research (FIIRO), Oshodi. After they have com­pleted the training, the gov­ernment now hook them into cooperatives and give them interest-free loans.

“With all the resources at the disposal of the Lagos State gov­ernment, what are they doing in that direction? Like the Euro­peans will say ‘a man who has no job is a ready tool for thug­gery’. We also have a popular saying here that ‘an idle hand is a devil’s workshop’. When the youths wake up in the morning with no job, they are in a state of helplessness and hopeless­ness. Yet, somebody is getting N30 billion every month.

“My advice to the Lagos State government is, go and create jobs for these young people. Even graduates are now staying at home in Lagos Island with no job. It is unemployment that is driving these youths into becoming members of Nation­al Union of Road Transport Workers (NURTW)”.