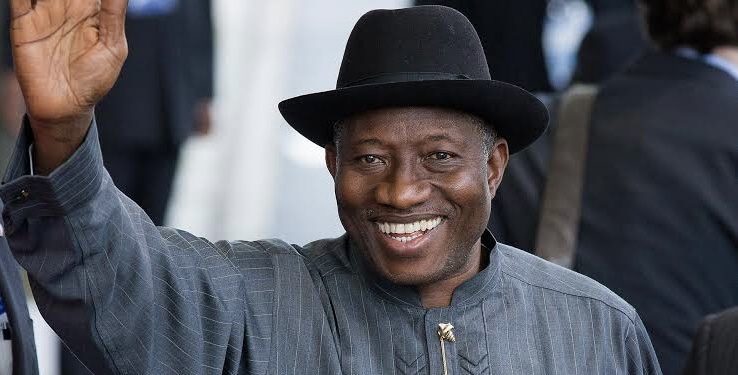 Former President Goodluck Jonathan has said he will never contest for the Presidency of the country again.

He said he would be diminishing himself if he should decide to begin to lobby people and campaign for election again.

Jonathan said this in an interview published in a book, “My Time As Chaplain In Aso Rock,” presented to the public on Tuesday.

The book written by Nathaniel Bivan contains the accounts of the Chaplain of the Aso Rock Villa Chapel during the Jonathan administration, Obioma Onwuzurumba.

“If you wake up tomorrow and see that I am President again, that means there may have been circumstances beyond my control. But not to go and pick one form and go and start lobbying people and running for campaigns; I can’t do that again. If I do that, I will diminish myself,” the former President said.

Jonathan said he enjoyed the drama that characterised the rumour earlier in the year that he had purchased a nomination form of the All Progressives Congress to enable him to contest for the party’s presidential ticket.

Ahead of the June 2022 APC presidential primary, a group, Nomadic Pastoralists and Almajirai Community, led by Ibrahim Abdullahi, purchased the N100m nomination and expression of interest forms in Jonathan’s name.

Speaking on the controversy that trailed the group’s decision, Jonathan said, “I was enjoying the drama. At least they are not insulting me. After all, I was pursued out of the office that I was not good enough. So, if now, Nigerians are saying, ‘Oh, this man should come,’ that means they are cleaning me up. So, let me enjoy the drama.

“I was not disturbed. I know I cannot go and start struggling to be President again. It wasn’t only Nigerians who were asking me such questions, even most of the top ambassadors -the American ambassador, the UK High Commissioner, France, and all of them. They came to ask me whether I would contest. I don’t think I would contest any election.

“If you wake up tomorrow and see that I’m President again, that means there may have been circumstances beyond my control. But not to go and pick one form and go and start lobbying people and running for campaigns, be it PDP power or APC broom and moving across Nigeria. I can’t do that again; if I do that, I will diminish myself.”

He added that the only roles acceptable to him now involve stabilising democracy in troubled African states.

He added, “Assuming there’s some confusion, and sometimes things like that happen in countries. So, they tell me to come and play a role in stabilising things; a stable democracy where one leader hands over to another is what we all want.

“Let us go through that process and not interrupt the democratic processes. We pray such things should not happen. Otherwise, to go and say I’m contesting on the platform of any party at all. No!”

Jonathan argued that the APC’s same-faith ticket would eventually lead to a lapse in the representation of Nigeria’s religious diversity.

He said, “When I took over as the vice president, the tradition then was that if the President were a Christian, the Vice would be a Muslim and vice versa. We have religious festivals in Nigeria and, of course, National Day, where there will be Jummah prayers and Christian prayers.