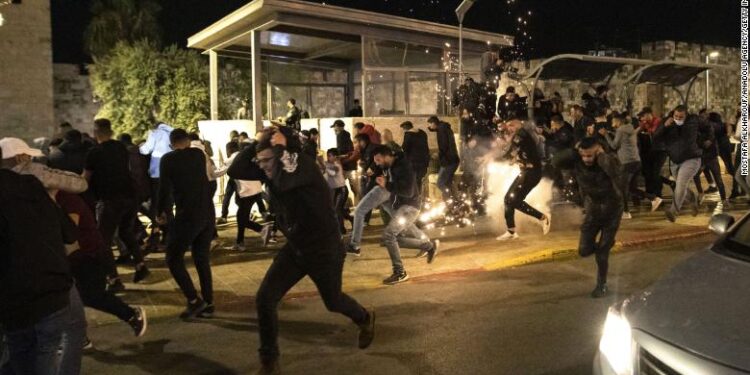 Clashes between Palestinians from east Jerusalem and Israeli police around the Damascus gate entrance to the Old City erupted in a night of unrest that earlier saw Jewish extremists marching through another city street shouting “Death to Arabs.”

The violence marks a high point so far in a new phase of complex heightened tensions in the city which began a week and half ago around the start of Ramadan, and prompted an unusual statement Friday morning from the US embassy in Jerusalem in which it called on “all responsible voices [to] promote an end to incitement.”

Hundreds of Palestinians gathered in the area around the Damascus gate Thursday evening to protest the closure of the plaza space in front of the gate, a popular place for young Palestinians to hang out, especially during Ramadan.

The violence continued well into Friday morning with incidents reported across the city.

Glass bottles and rocks were thrown at police, who used stun grenades, rubber bullets and water cannons spraying foul-smelling ‘skunk water,’ in an effort to disperse the crowds.

At one point, a group of young men managed to break down a pole with a security camera mounted on top and set it alight, temporarily creating a barricade.

The Palestinian Red Crescent said 105 Palestinians were injured, of which 22 required treatment in hospital.

Close by, police used barricades of their own to prevent a march by hundreds of supporters of the Jewish extremist ‘Lehava’ movement from reaching the same area.

Israeli border police block members of Lehava, a Jewish extremist group, near Damascus Gate amid heightened tensions in the city.

Lehava has been emboldened by the recent election to the Israeli parliament of several extremist-racist politicians, all of whom have been openly courted by Prime Minister Benjamin Netanyahu in his ongoing attempts to form a new government.

Tensions have been heightened further by a number of videos posted to Tik Tok over the last couple of weeks apparently showing acts of assault, including one purporting to show a Palestinian youth slapping two religious Jews riding the city’s light rail tram service.

The violence continued well into Friday morning with incidents reported across the city, including one captured on video apparently showing Palestinian youths repeatedly kicking a Jewish man in east Jerusalem as he lies on the ground attempting to protect his head.

Another video appears to show religious Jewish youths attacking an Arab family house throwing sticks and other objects into the compound while a baby can be heard screaming.

Police say twenty of their officers were injured, three of whom were taken to hospital.

There were 44 arrests, police say.

In a noteworthy development, the US embassy issued a statement Friday morning, in English, Hebrew and Arabic, which said, “We are deeply concerned about the incidents of violence in Jerusalem over the last several days. We hope all responsible voices will promote an end to incitement, a return to calm, and respect for the safety and dignity of everyone in Jerusalem.”