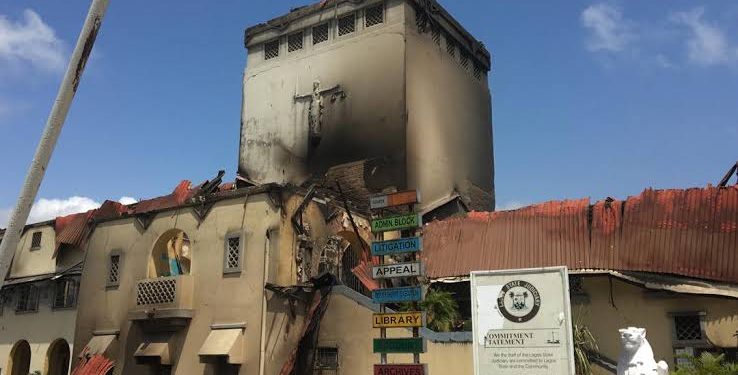 The Lagos State Rebuilding Trust Fund has begun reconstruction of the Igbosere High Court, that was burnt down during the #EndSARS protest on October 21, 2020.

Two excavators were seen demolishing the remains of the court, said to be Nigeria’s oldest and most recognisable judicial building.

During the #ENDSARS protest, hoodlums gained access into the premises, carting away computers, printers, files, fans, air conditioners and other items and later set the building ablaze before fleeing.

The chairman of the Lagos State Rebuilding Trust Fund, Yemi Cardoso, had stated in September 2021, that the Fund started off as a government thing, but is now a public-private partnership.

“It is now a Public-Private Partnership (PPP), which has its own status and laws for procurement policies and others. The governance and the legality of it will obviously face its own time. If it is a committee of government, it would have started work immediately but in this case, you have to ensure that it goes through CAC and other necessary procedure,” Cardoso said.

Cardoso, is yet to reply enquiries on the timeline and cost of the rebuilding projects as of the time of filing this report, but a source in the Ministry of information confirmed the development.

He said the committee would officially brief the press at a later date.

The Commissioner for Economic Planning and Budget, Sam Egube, and Permanent Secretary, Ministry of Works and Infrastructure, Jimi Hotonou, are members of the board representing the public sector.