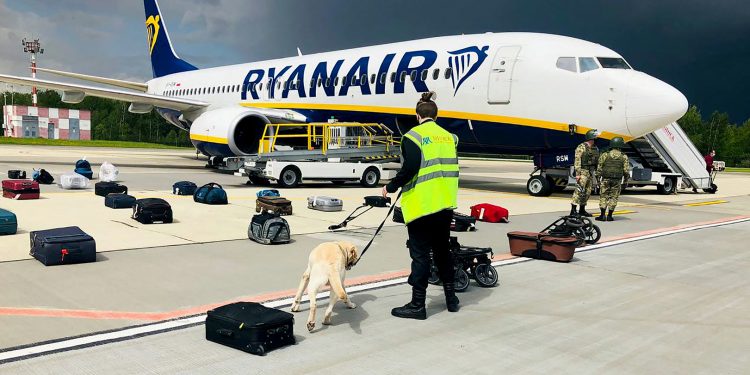 The bloc agrees to ban Belarus from its airspace amid other sanctions after the forced diversion of a jet and the arrest of an opposition journalist.

European Union leaders have agreed on a set of sanctions against Belarus, including a ban on the use of the 27-nation bloc’s airspace and airports amid fury for the forced diversion of a passenger jet flying between two EU countries in order to arrest an opposition journalist.

In what EU leaders have called a brazen “hijacking” of Irish carrier Ryanair’s plane flying from Greece to Lithuania on Sunday, they demanded on Monday the immediate release of Roman Protasevich, a key critic of authoritarian Belarusian President Alexander Lukashenko.

The EU leaders also decided to slap individual sanction of officials linked to the operation, and called on the International Civil Aviation Organization to start an investigation into what they see as an unprecedented move and what some have called “state terrorism”.

The decisions at the summit will be turned into action as soon as legal proceedings allow.

US President Joe Biden also condemned Belarus for its actions on Monday and said he had asked his advisers to give him options to hold those responsible to account.

In a video released earlier on Monday, Protasevich said he is cooperating with authorities and “confessing” to charges of organising protests.

Speaking in a video circulated by state TV channels, Protasevich said, “I am in Detention Centre no 1 in Minsk. I can say that I have no health problems, including with my heart or any other organs.”

The 26-year-old is wearing a black hoodie and sits behind a table in a nondescript room with a pack of cigarettes by his side.

“The attitude of employees towards me is as correct as possible and according to the law. I continue cooperating with investigators and am confessing to having organised mass unrest in the city of Minsk,” he said.

The comments were immediately dismissed by his allies as having been made under duress.

“This is how Raman looks under physical and moral pressure. I demand the immediate release of Raman and all political prisoners,” Thiskanouskaya, wrote on Twitter in English, using the Belarusian spelling of his name.

NEXTA, a news service where Protasevich worked before setting up his own widely followed blog, ran an interview with his mother, who said that as soon as she heard reports of a bomb scare on a flight, she knew it was a plot to capture him.

“I just want to say that my son is simply a hero, simply a hero,” Natalia Protasevich said, weeping. “I truly hope that the international community will wake up for him.”

His father, Dzmitry Protasevich, said in an interview with Reuters news agency: “This is total insanity, what is going on.”

The Belarusian interior ministry earlier confirmed the arrest of Protasevich, saying he was taken into pretrial detention.

Minsk also rejected rumours on social media that Protasevich had been hospitalised and said authorities had no information concerning any health problems.

The statement, published on the Telegram messaging service, was the first provided by the authorities concerning Protasevich’s location since he was detained on Sunday at Minsk airport when his plane was forced to make an emergency landing there.

The blogger’s ordeal started on Sunday when a Belarusian MiG-29 fighter jet scrambled to intercept a Ryanair flight from Greece to Lithuania in response to an alleged bomb threat, and escort it to Minsk.

Ryanair said Belarusian air traffic control notified its crew of a “potential security threat on board” and instructed them to divert the plane to the nearest airport, Minsk. Upon landing, Belarusian authorities took Protasevich into custody.

The EU and the United States imposed several rounds of financial sanctions against Minsk last year, which had no effect on the behaviour of President Alexander Lukashenko, who withstood widespread demonstrations against his rule after a disputed election.

Lukashenko denies election fraud. Since the disputed vote, authorities rounded up thousands of his opponents, with all major opposition figures now in jail or exile.

Belarus says it acted in response to a false bomb threat written in the name of the Palestinian militant group Hamas. Hamas spokesman Fawzi Barhoum denied his group had any knowledge or connection to the matter.

Belarus said its ground controllers had given guidance to the flight but had not ordered it to land. State media said the intervention was ordered personally by Lukashenko.

Russia, which has provided security, diplomatic and financial backing to Lukashenko, accused the West of hypocrisy.