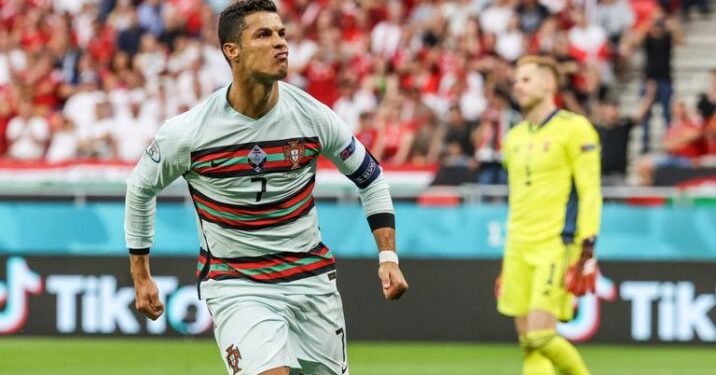 Cristiano Ronaldo became the all-time top scorer at the European Championships after two goals in the final minutes helped holders Portugal beat Hungary 3-0 in their Group F opener on Tuesday.

Ronaldo now has 11 goals in the competition, taking sole possession of the record he previously shared with France’s Michel Platini on nine.

Portugal broke the deadlock in a game they dominated with a Ronaldo penalty. A second effort added to the final score, which was harsh on Hungary, who worked hard in front of a packed Puskas Arena in Budapest – the only stadium to be filled to capacity at the Euros due to the coronavirus pandemic.

Ronaldo then wrote his name in the record books with a goal from the spot after Willi Orban fouled Rafa Silva in the box.

The Portuguese superstar then scored his 106th for Portugal and closed the gap to Iranian Ali Daei’s record (109) of the all-time men’s international top goalscorer.

“It was important to win, it was a difficult game,” Ronaldo said. “I’m grateful to the team for helping me to score two goals and be the Man of the Match. Now we must go on.”

Didier Deschamps’ men handed a sluggish-looking Germany their first opening-game defeat in the Euros, courtesy of an own-goal by Mats Hummels in the 20th minute.

Stats showed that France had just over 40-percent possession and only four attempts on goal but Deschamps said they were more clinical than Joachim Low’s side.

“I wouldn’t say that we did dominate them because we played against a good team in Germany who caused us problems,” Deschamps said.

“They had a lot of ball possession, more than us. We were defending very well. It was a match played on a very high level, two titans facing each other.”

France had two goals ruled out for offside in the second half.

Kylian Mbappe sent a curling shot inside the far post midway through the half and then set up Karim Benzema for another late in the match.

Benzema was playing in his first competitive game for France since a World Cup quarterfinal loss to Germany in 2014.

Mbappe also had a penalty appeal waved off in between the offside goals – Hummels had timed his tackle perfectly when the 22-year-old Frenchman would have been through on goal.