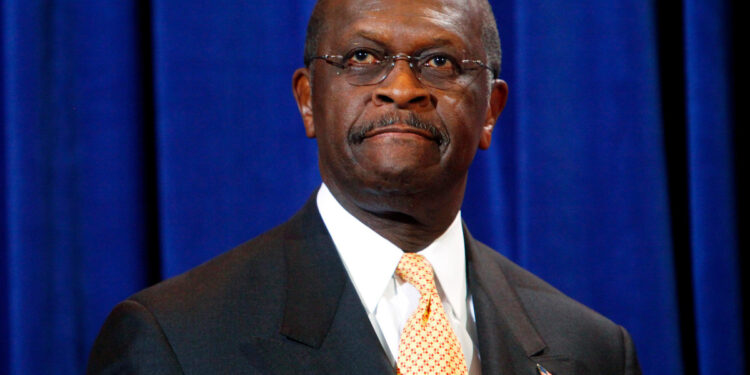 Herman Cain, a successful businessman who ran for the 2012 Republican presidential nomination and later became a backer of President Donald Trump, has died from complications from COVID-19, according to a statement posted Thursday on his personal website.

“Herman Cain — our boss, our friend, like a father to so many of us — has passed away,” the statement posted to his website said.

“We knew when he was first hospitalized with COVID-19 that this was going to be a rough fight. He had trouble breathing and was taken to the hospital by ambulance. We all prayed that the initial meds they gave him would get his breathing back to normal, but it became clear pretty quickly that he was in for a battle,” the statement said.

The statement noted that Cain, who survived a battle with Stage 4 colon cancer, had been “pretty healthy in recent years” but was considered to be in a “high-risk group” for COVID-19 complications due to his history with cancer.

Last month, Cain had tested positive for COVID-19, just a little over a week after he had attended a Trump campaign rally in Tulsa, Oklahoma on June 20.

While there’s no way to pinpoint exactly where he contracted the virus, Cain posted a photo of himself with others at the event, which showed him without a mask on.

Cain tested positive on June 29. A statement posted to his official Twitter account days later said that Cain had developed symptoms “serious enough that he required hospitalization” at an Atlanta-area hospital.

Cain, who is an official surrogate for Trump’s 2020 re-election campaign, wrote an op-ed after the rally in which he defended the event, writing, “The media worked very hard to scare people out of attending the Trump campaign rally last Saturday night in Tulsa.”

Cain made his name in the restaurant industry, where he ran the Nebraska-based Godfather’s Pizza franchise from 1986 to 1996 and has claimed his leadership saved the company from bankruptcy. He touted that experience as a conservative presidential candidate who was briefly the GOP frontrunner in a crowded 2012 primary field.

But Cain ended his campaign after allegations surfaced that he had sexually harassed several women around the time he headed the National Restaurant Association from 1996 to 1999, and that he had an extramarital affair. Cain has denied the allegations, and Trump called them an “unfair witch hunt.”

“Herman Cain embodied the American Dream and represented the very best of the American spirit,” White House press secretary Kayleigh McEnany tweeted. “Our hearts grieve for his loved ones, and they will remain in our prayers at this time. We will never forget his legacy of grace, patriotism, and faith.”

House Minority Leader Kevin McCarthy, R-Calif., tweeted that Cain “will always be remembered for his love of country.”