From Lagos To Israel, My Biking Ambition- Kunle Adeyanju 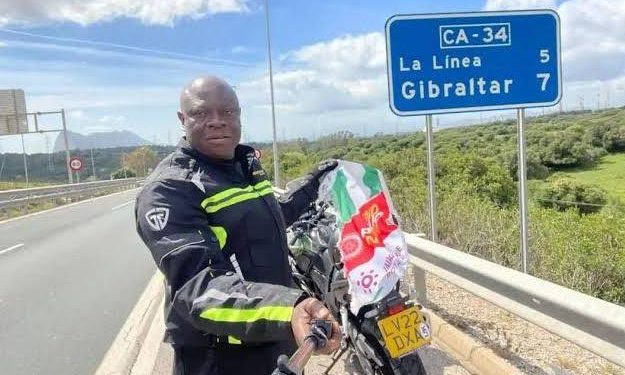 Nigerian adventurer and London-to-Lagos biker, Kunle Adeyanju has said that his next adventure will be to ride from Lagos to Israel, and from Israel to Tibet.

The biker said he wished to accomplish the adventure latest by 2024, as he also disclosed that his destination is Mt Everest.

Adeyanju revealed this in an exclusive interview with Arise TV recently.

He took the world by surprise by spending 41 days to ride on a bike he named “Eagle” from London in April 19 and arrived in Lagos on May 29. In his exploration, he covered about 13,000 km across through 11 countries.

Sharing his experience, the biker said he was moved after his close friend died of polio and dedicated the journey to him to campaign against the disease that took his friend’s life two years ago. He also said that he would auction his Eagle bike which he wished could be in a museum for people to see in years to come.

He shared an emotional story of how he spoke to Eagle during his difficult moments of the adventure, and it communicated back to him.

“You know during the course of the trip, the bike became my friend, my closest companion. I spoke to him and discovered that machines also have soul. We may think they are just metals but they have soul because I spoke to Eagle a lot on the trip and the bike did respond back to me. We communicated.

“It’s going to be disrespectful for me to ride Eagle just as a street bike because he’s done that very big and great thing. It was a team work between me and Eagle. So, I’m going to be auctioning Eagle and I hope whoever ends up buying Eagle is going to put it in a museum where people can see. The generation cannot only hear the story but let them see.”

On his next adventure, Adeyanju said he would like to experience Tibet and Everest which are the highest plane and point respectively in the world.

Adeyanju said, “I’m going to buy another bike and do another adventure. My next adventure is going to be riding from Lagos to Israel, just passing through Israel then to Tibet.

“Then, I actually want to ride on Tibetan plane because that is the highest plateau you have in the world. They say God lives in Tibet because of the highest purity. I want to experience that purity.

“My destination is Everest. I’m going to drop my bike at Everest base camp and try to climb Everest. That’s what I’m doing to do with myself in the next two years,” said the adventurer.

Tibet, is on the Tibetan plateau with an average point of 4,830 metres located in the northern side of the Himalayas. It is to the north of India, Nepal, Bhutan and Myanmar. It is nicknamed “Roof of the World”.