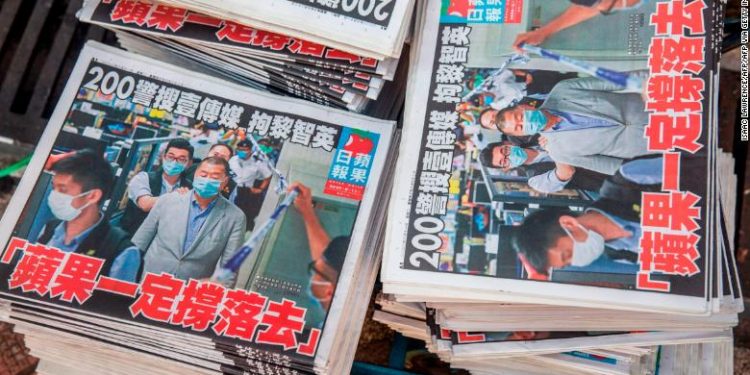 One year was all it took for a Beijing-imposedNational Security Law to take downHong Kong’s largest and loudest pro-democracy newspaper.Next Media announced Wednesdaythat Apple Daily, its flagship tabloid, would publish its final copy Thursday due to an untenable environment in which its journalists had been arrested and millions of dollars in assets had been frozen. Its digital platform will cease operations on the same day, the company said in a statement.

The news sent a deep chill through Hong Kong’s media industry and undermined government claims the new legislation would not diminish press freedom.\Last year, China’s ruling Communist Party moved to bring Hong Kong in line with its authoritarian ruleby bypassing the city’s legislature to implement thesecurity law. It punishes anything the authorities deem to be subversion, secession, terrorism and collusion with foreign forces with up to life in prison.

While city leader Carrie Lam saidback then thatpress freedoms would still be protected, Apple Daily staffers say they knew it was only a matter of time before they were targeted.

“But it still came as a shock when it happened,” said one journalist at the publication, who asked to remain anonymous out of security fears.

Since the law took effect, Apple Daily has been crippled bit by bit. Founder Jimmy Lai — already in jailfor attending a pro-democracy rally — has been arrested and charged with colluding with foreign forces to endanger national security.

Five of the newspaper’s top editors and executives have been accused of the same crime,apparently for using articles to call for foreign governments to sanction Hong Kong.

Hundreds of police officers have twice raided the publication’s newsroom, most recently seizing computers and materials — an alarming development for journalists and their sources in an increasingly sensitive environment. Several Apple Daily journalists had already quit before this month, saying the rewards of their work no longer outweighed the risk of imprisonment.

Even as official pressure piled on the newspaper, public supportsurged.Last Friday, after the arrest of its top editors, Apple Daily printed 500,000 copies which sold out.

That wasn’t enough to counter a financial squeezebrought on by Hong Kong authorities. While Next Media told investors ithad enough money to last 18 months from April, in recent days the paper’s bank accounts had been frozen.

On Wednesday, as the board met to discuss the paper’s future, police officers again descended on the newsroom arresting two more journalists. Hours later, the paper announced that after 26 years on newsstands, it would close its doors.”A woman sent me a note a few days ago saying without Apple Daily she just doesn’t feel as safe as she used to with a free press as the protector of society,” said Mark Simon, one of Lai’s top advisers.”They’re coming for everyone else soon.”

Jimmy Lai founded Apple Daily in 1995, channeling the wealth he’d accumulated as a textile tycoon into the Next Digital publishing operation. The mission of its centerpiece title, Apple Daily, was always clear: to criticize the Communist Party that Lai had fled mainland China from as a child.

The newspaper was a sensation, and its tabloid sensibilities quickly made it a market leader, giving Lai a huge platform to influence opinion in Hong Kong. The paper drove a paparazzi culture in the city, and at times attracted ire for its reporting methods. But it also tracked the wealth of mainland officials and their families in Hong Kong, and devoted ample resources to holding those in power to account.

Apple Daily continued poking the bear, even if that meantmajor Hong Kong corporations such as Cathay Pacific or CK Hutchison Holdings never advertised with the publication.

The newspaper didn’t back down as the Communist Party under President Xi Jinping grew increasingly intolerant to anydissent — especiallyin its disputed or semi-autonomous territories such as Hong Kong, which after being handed back to China from Britain in 1997 was promised its own system of governance for 50 years.

That two-track setup led to a disconnect between how Hong Kongers expected to be governed and Beijing’s desire to control the city.Lai was a key figure in a series of 2014 protests dubbed the Umbrella movement, which brought central Hong Kong to a standstill for months. His paper became a symbol of the opposition to Beijing’s plans for how Hong Kong’s leader would be selected.

When mass unrest erupted again in 2019, this time over a bill proposing extradition to China, Apple Daily’s front pages urged readers to attend huge marches, and printed anti-government posters for them to carry.

Anger in the city that yearturned into the most serious violence Hong Kong had seen in decades: The city’s legislature was sacked, a dramatic 12-day siege unfolded at a university and the international airport was shut down, twice.All that was too much for Beijing on Chinese soil. In June2020,as pandemic restrictions thwarted the ability of Hong Kongers to protest, China passed the National Security Law.

In the 12 months since, nearly all pro-democracy politicians have either been jailed or have fled the territory. Apple Daily was the last major voice of the pro-democracy camp still at large.

Apple Daily divided opinion in Hong Kong. It wasloved by those who shared its liberal values and loathed by conservatives who accused it of causing chaos.Still,its death has caused alarm about freedom of press in Hong Kong. On Tuesday, city leaderLam triedto dismiss those fears, saying that the police probe into Apple Daily was “unrelated to normal journalist work.”Michael J. Abramowitz, president of NGO Freedom House railed against that sentiment.”

Treating independent, fact-based journalism as a threat to national security is an unacceptable attack on press freedom and comes amid a wider crackdown on freedom of expression and freedom of assembly in Hong Kong,” he said.

It is now unclear how Hong Kong’smini-constitution — the Basic Law, which guarantees freedom of expression and the media — will operate alongside a national security law that sets increasingly narrower parameters for journalistic work.

The Apple Daily’s closure follows a slew of attacks on pressfreedom. Thecity’s police chief recently proposed an anti-fake news law; a journalist was convicted for an administrative error when investigating alleged police wrongdoing; and public broadcaster RTHK has seen its coverage squeezed.

At the same time, there has been a clampdown on broader civil liberties. This year, Hong Kong’s annual Tiananmen Square vigil was not permitted to go ahead, ostensibly because of Covid restrictions, and potential attendees threatened with up to 12 months in jail.In a sign of Hong Kong’s decreasing tolerance for political positions that diverge from those of Beijing, Taiwan announced it will remove all non-local staff from its office in the city.

Taipei accused the Hong Kong government of demanding its Taiwanese staff sign a document acknowledging Beijing’s claim over the self-governing island as a prerequisite for visa renewals.

As newsstands open next week, they will be absent of the apple-bearing masthead that has been a staple for decades. Jimmy Lai remains in jail with no ability to advocate for the paper founded. In his mid-70s, it is debatable whether he will ever walk free in Hong Kong again.

“I never would have imagined it would come to this.” said Andrea Lo, a freelance journalist in Hong Kong. “Apple Daily is a huge part of everyday life for us as Hong Kongers, but not just because it has consistently been the biggest champion of the voice of the people.

All of us find a lot of value in its coverage on everything from the pro-democracy protests, to real-time reports on incidents around Hong Kong.”On Wednesday, grieving readers gathered outside the newspaper’s headquarters, holding placards, and bearing cards and flowers.

“I think people will miss the Apple Daily as a platform where they could speak freely and be critical of the government and Beijing,” said the Apple Daily newsroom staffer.

“Maybe some other media will become the substitute for us,” he added, doubtfully.