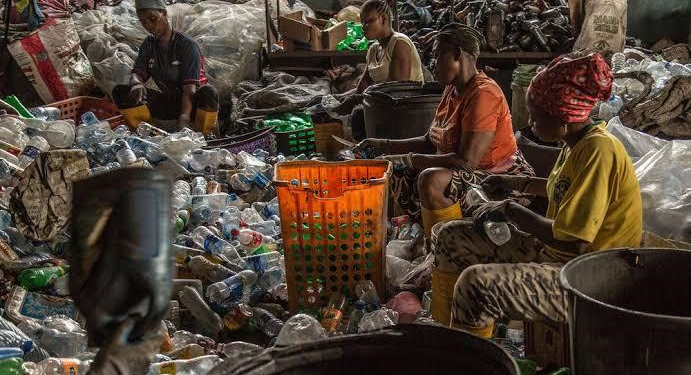 In the megacity of Lagos over 3.6 million tonnes of plastic waste are generated and lost to the city’s drainages, yearly, recent data from Energy Consultants, Bio-energy Consult, shows. Meanwhile, some parents in north-eastern suburb of the city, in a slum community called Ajegunle, are being able to use these same recyclable waste to pay their children’s tuition.

“It all started last year. It was motivated by a Television soap opera where I saw a Mexican school using plastic recycling to fund the tuition for poor people. Then, in real life, someone from a recycling firm also enlightened me about it. Most of the parents couldn’t pay their children’s fees and it was an idea that elated them,” says Rose Amuzie, 21, the Co-founder of Isrina Schools and founder of the recylespay initiative.

For many parents it has been a welcome relief for them, as they are unable to, hitherto, afford to pay their wards’ needs, despite the fact that the school charges under N5, 000 Naira per term as tuition.

According to a parent, Mrs. Blessing Onwuka, “I am excited about the project, because it has brought me a lot of relief. I used to struggle to pay my child’s school fees. But now, at least it is helping me out.”

This has been the realities for a majority of the parents in this infamous poor community around Mechanic Bus Stop, Ajegunle, where the school is located. Since the project commenced, in 2019, over 40 children have been able to benefit from it.

“We began the partnership with a Lagos-based recycling firm, Africa Cleanup Initiative. All the parents need to do is find plastic waste within the community and they store it. The firm comes to pick up, every week or two weeks, sometimes. Then, they get to weigh these plastics. A kilogramme costs N25 Naira. So, if we pick up to 0.2 tonnes, we can successfully sponsor a child. It has been over a year now and we gathered over 2,000 kilogrammes (two tonnes) of plastic waste and other recyclables.

“We have over 40 wards that have benefited from these through payment of notebooks, educational materials, parts of school fees, exam fees, continuous assessment fees and all of that,” Amuzie said.

The school, which is a low-fee-paying school, began as more of a volunteering project by a 15-year-old Grace Amuzie, who has captained the ship four years down the line, together with members of her family.

“The inspiration behind Isrina Schools is the environment I grew up in – Ajegunle. I grew up in an environment where education is a luxury. I myself was sponsored by a kind woman from my secondary school up until university level. When I was in Secondary School 2, I started teaching kids in my neighbourhood and this continued for a while. There is no better way for me to help my community and also to repay the kind gesture of my sponsor,” Grace says, solemnly.

With emotion she expresses that: “Since the inception of Isrina schools, we have been able to contribute to the wellbeing of the children in this Ajegunle environment, emotionally and otherwise. We have helped them to get access to education. And I think that’s far better for a child. We started with 4 kids and we have over 100 pupils in attendance.”

Despite the lucid dreams of the school’s founders, they have, like many other charity-like institutions grappled with many problems, especially the issue of funding.

“We faced the issue of funding. It affected us for a while. In 2018, my sister started this initiative that was able to help us gather funds from private individuals.

The school continues to stick its neck out for the kids who have been conditioned to their homes, in the wake of the Covid-19 pandemic, as they have had to distribute so many independently sourced instructional materials.

According to Rose, “We partnered with an education-centered non-profit called Unusual Schools, and we were able to distribute self-instructional materials; we call them Learning Packs, to the students. At least they were able to cope by learning some math and English during the pandemic. We couldn’t do much, but it’s more than nothing.”

After several years of working with the children, the Amuzie sisters acknowledge that some experiences with the children have actually impacted the vision they have for the school. Their biggest goal now is to create a ripple effect of progressiveness in their community, especially in boosting access to child education.

“There is a girl called Mercy, she is in primary four. She is exceptionally brilliant. She goes outside her way to help her parents. During the lockdown, she gathered kids in her environment to teach and she collected money from them for the work. I like her spirit and the commitment she has shown. Another child, Oluchukwu is a primary six pupil who is so talented in arts that he can create from anything. Those experiences inspire us.

“The vision of the school is to raise these children as leaders for exploits. We see it as an investment. We target at empowering these kids in making sure that they get to reach their full potentials in any way we can help them,” Grace says.

For Rose, “A memorable experience for me would be having these children experience their first excursion when we went to Nike’s Art Gallery in Lagos. It is one experience whereby I would never forget. Again, another of our children, Samuel Onwuka, who had dyslexia, read fluently for the first time. I was shocked.”

The sisters both believe that the plastic-for-tuition initiative is a long-term project, because the “plastics in our environment is more than enough to pick within one or two years.”