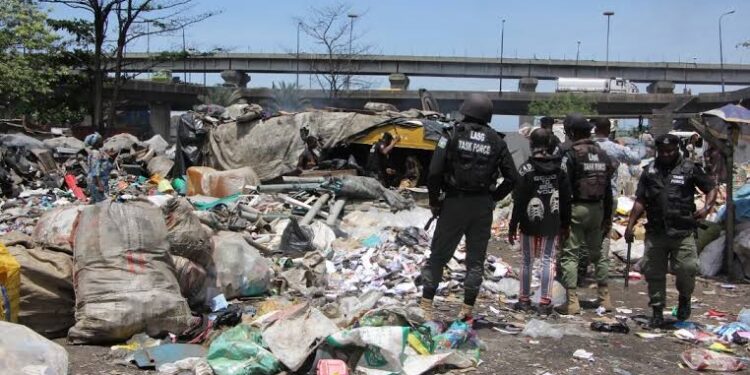 Lagos State Environmental and Special Offences Unit (Taskforce) has served squatters at Iganmu Under Bridge a 3-day notice for the removal of all illegal structures, trucks and vehicles in the area.

The evacuation is to help curtail the rising cases of traffic robberies and other security breaches around that axis in addition to environmental nuisance by the squatters.

This ultimatum was given by the Chairman of the Agency, CSP Shola Jejeloye, who advised the owners of the illegal structures, abandoned trucks and shanties to immediately vacate the area within the stipulated period given by the State Government.

CSP Jejeloye, while appealing to traders, mechanics, and other squatters living under the bridge in clusters, noted that government would enforce the 3-day removal notice on Thursday, May 13, 2021.

The Chairman expressed the government’s worry about the squalid environment, which is also being used as hideouts for criminals who daily dispossess road users of their valuables, adding that the present state of the environment allows criminals to escape police arrest.

He averred that the State Government is also committed to reducing the traffic around Ijora and Apapa, hence the need to also remove every hindrance to the policy.

Jejeloye said, “The indiscriminate parking and abandonment of trucks on the road is inimical to the achievement of the desired objectives.”

CPS Jejeloye warned the owners of abandoned trucks and vehicles, shanties, containers and kiosks to remove them before the expiration of the deadline, noting that this is not the first Notice of Removal served on the occupiers.

He said, “Governor Babajide Sanwo-Olu’s newly signed ‘Executive Order’ on traffic and sanitation has zero-tolerance on environmental abuse, illegal and indiscriminate dumping of refuse and defacing of the environment. I can assure you that government would enforce this notice come Thursday.’’