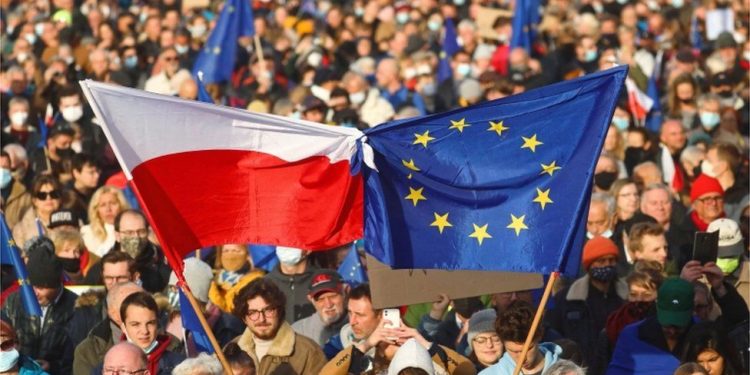 Poles backing EU membership have taken part in protests across the country, amid fears it could leave the bloc.

The rallies on Sunday were held in response to a top court ruling that said key EU laws were “incompatible” with the Polish constitution.

Protests were held in about 100 towns and cities, with some 100,000 people gathering in the capital, Warsaw.

The ruling has raised concerns Poland could exit the EU, but the government has denied having any such intention.

The court’s decision last Thursday effectively rejected the core principle that EU law has primacy over national legislation. It was the most significant challenge to the supremacy of EU law to date.

Poland’s Prime Minister, Mateusz Morawiecki, has defended the decision and said his ruling party had no plans for what some are calling Polexit.

“This is a harmful myth, which the opposition uses for its own lack of ideas about Poland’s responsible place in Europe,” Mr Morawiecki wrote on Facebook following the pro-EU rallies.

On Monday, the European Commission’s industry chief, Thierry Breton, said he did not believe “for one second” there would be a Polexit after the court ruling.

He said the Commission – which draws up the proposals for new EU laws – would analyse the ruling before deciding what action to take. The Commission has previously warned it will use all its powers to bring Poland into line with EU law.

‘This is our Europe’

That support was on display on Sunday, when opposition politicians, activists and artists took part in the demonstrations.

At the rally in the capital, Donald Tusk, former president of the European Council and now leader of the opposition party Civic Platform, called on people to “defend a European Poland”.

Wanda Traczyk-Stawska, a 94-year-old veteran of the Warsaw Uprising against the Nazi German occupation in 1944, spoke at one event.

“This is our Europe and nobody is going to take us out of it,” she said.

Protester Janusz Kuczynski said he was worried the country was going backwards. “I am afraid that bad times may come back,” he said. “There was simply no freedom.”

What was the court ruling about?

Poland’s Constitutional Tribunal effectively rejected the principle of the primacy of EU law over national legislation in certain judicial matters.

The legal challenge was brought by the Polish prime minister in March this year.

It was the first time in the history of the 27-strong EU bloc that a leader of a member state had questioned wholesale EU treaties in a constitutional court.

Those changes have been criticised by the European Commission for undermining judicial independence and increasing political control over courts.

Commission President Ursula von der Leyen said she was “deeply concerned by the ruling” and vowed to “uphold the founding principles of the EU’s legal order”.

The court decision was the latest flashpoint in a deepening row between the EU and Poland.

Poland’s right-wing populist government has found itself increasingly at odds with the European Commission over issues ranging from LGBT rights to judicial independence.

Negotiations are ongoing and some analysts suggest the government is using the ruling as leverage to get the plan agreed.

Last week Jacek Karnowski, editor-in-chief of the pro-government Sieci weekly, told the BBC that Polexit was “unimaginable and unrealistic”, although he said the topic was now a matter of discussion.