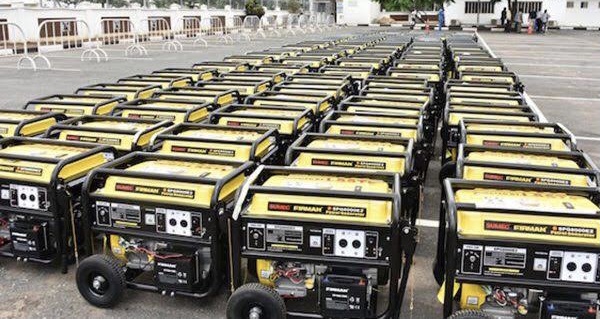 Nigeria spent $5.26bn importing electric generating sets, electric transformers, vacuum cleaners, hair clippers, and other electrical machinery and equipment in 2020 and 2021, according to data from the International Trade Centre.

In a recent report, the National Bureau of Statistics disclosed that Nigeria gets 48.6 per cent of its electricity needs from generators powered by petrol, diesel, and gas.

The statistics body revealed that the national grid provided 51.2 per cent of the nation’s power needs, leaving many citizens to depend on generators for electricity.

According to a report by Stears Business, over 40 per cent of households in Nigeria own and use generators and spend about $14bn annually to fuel them.

The report titled, “Nigeria’s State of Power: Electrifying the Nation’s Economy,” said, “Nigerian households, on average, have electricity in their homes for 15 to 18 hours each day. Of that, 44 per cent (or 6.8 hours) is self-supplied by generators.

“And this differs by geography. In a state like Taraba, only 19 per cent of households report having electricity. Over 40 per cent of Nigerian households own generators and bear the associated costs. First, the cost of purchasing generators – an estimated $500m between 2015 and 2019, higher than the proposed capital expenditure in Nigeria’s 2022 budget.

“There is also the cost of powering these generators. Sources and estimates vary widely, but the African Development Bank estimated that Nigerians spend $14bn fuelling petrol- or diesel-powered generators.”

The report explained that low petrol prices ensures that small petrol generators are attractive to households and micro, small and medium enterprises).

According to the World Bank, about 43 per cent of Nigeria’s population (85 million people) lack access to its electricity grid. This is the largest energy-access deficit in the world.

It stated that a lack of reliable power in the nation is responsible for annual economic losses estimated at five to seven per cent of GDP—at a cost of $25bn. It estimated that there were over 22 million gasoline generators powering about 26 per cent of all households and 30 per cent of MSMEs in the nation.

Commenting on the importation of electrical machineries, associate professor of Economics at the Pan Atlantic University, Olalekan Aworinde, said, “The implication of this is many. For instance, foreign exchange management, all those goods were paid for in dollars.

“And this tells us that there is no demand for the naira, which is one of the reasons why there is constant depreciation of the naira because, by the time they buy these goods, they have to pay in dollars. And this depletes the foreign exchange reserves of the nation.

“Although, we also need to ask ourselves if we have the technical know-how to produce some of these things. What is the quality of the locally produced ones and where are the sources of the raw materials for local production?”