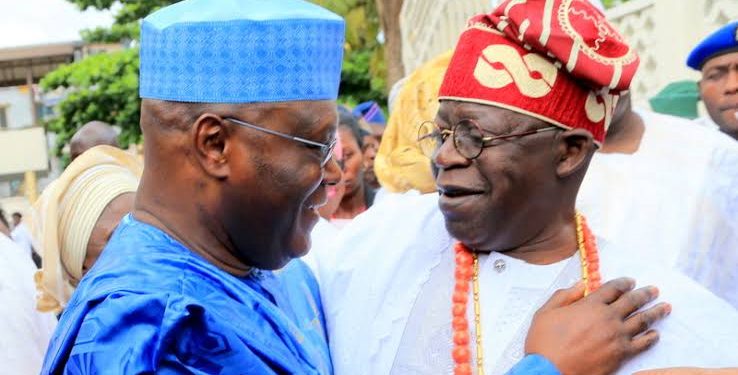 The Peoples Democratic Party (PDP) on Sunday exchanged words with the All Progressives Congress (APC) over the manifestoes of their respective Presidential candidates, Atiku Abubakar and Bola Tinubu.

While the PDP asked the ruling party and its candidate to explain how they intended to do away with subsidy without inflicting pain on Nigerians, the APC presidential candidate shaded his counterpart, Atiku, saying he would not be a part-time president ‘’that will spend 50 per cent of his time ruling the country from Dubai.’’

The former Lagos State governor in his manifesto unveiled in Abuja on Friday said he would fully deregulate the downstream, sparking anxiety that this may lead to a hike in fuel prices and inflation.

The regime of the President, Major General Muhammadu Buhari (retd.), has been paying subsidies since 2015 and it has also allocated N3.6tn in the 2023 budget to fund the fuel subsidy for the first half of next year.

But responding to inquiries from The PUNCH on Sunday, the spokesman of the PDP Presidential Campaign Council, Daniel Bwala said the ruling party and its candidate should clarify how they planned to deregulate the downstream sector without sparking inflation and hardship on the people.

“The APC and their candidate must clarify how they want to achieve this. It is their duty to provide this clarification,” he stated.

Another spokesman, Kola Ologbondiyan challenged Tinubu to move away from generic to specific solution-based models on how he intended to fix the troubled oil sector, stressing that Tinubu’s blueprint failed to answer the question of whether he would increase the cost per litre of PMS or privatize the sector to realize his goal.

“Atiku Abubakar has promised a phased withdrawal of subsidy in a manner that will not put absurd pressure on the economic life of Nigerians,” he added.

Also in a statement on Sunday, the PDP standard bearer, Atiku, called on Nigerians to hold the APC responsible for their failure, noting that the 2023 poll is a referendum on the APC’s performance.

In a newsletter sent to our correspondent, the former vice-president said, “The ruling party will want to run away from their poor performance. In fact, they will wish that we focus on topics that are irrelevant to the next election. But we won’t give them that advantage.

‘’We will hold them accountable for their scorecards. But even that is not enough. What is more important is that we don’t make the same mistake again. That’s why it is incumbent on us to evaluate the plans of each political party and let that be the yardstick of our electoral decisions.’’

But the APC Presidential Campaign Council spokesman, Festus Keyamo, challenged the Nigeria Labour Congress to declare its stance on fuel subsidy following the decision of the Labour Party Presidential flag bearer, Peter Obi, to remove it.

Keyamo made the statement on Sunday while fielding questions on how the APC Presidential Candidate, Asiwaju Bola Tinubu, hopes to contain the inflation and attendant crisis that might be triggered by a fuel price hike.

Keyamo disclosed that it was obvious all the leading presidential candidates had agreed that the subsidy would have to go at some point.

The Minister of State for Labour, however, believed the leadership of the labour unions owed Nigerians an explanation of their position on Obi’s proposed plan to end fuel subsidy.

He said, “When we raised the issue of Nigeria Labour Congress’ silence after Obi announced he will remove subsidy, I expected the press to take it from there. But everybody was silent. That got me worried because, being a labour minister, I know the issues involved.

“I know that the only reason subsidy has not been removed today is because of the NLC’s resistance and the fact that they may shut down the country. Despite seeing the benefits of removing it, these people continue to oppose it. Then all of a sudden, I saw on tv that their candidate (Obi) was endorsing its removal.”

On whether Tinubu can sustain the N174 per litre price for fuel or increase it to contain the attendant inflation, Keyamo said Nigerians should learn to look at the benefits.

The APC campaign council spokesman also expressed concerns that Nigeria cannot risk losing N250bn to N300bn monthly as a result of the burden that comes with fuel subsidy.

When asked if organised labour would support the plans to remove subsidy:

Head, NLC Information and Public Affairs, Benson Upah said  “Subsidy is called a fraud and we have people benefitting from this crime. We said that the most transparent way of ending subsidy is to fix the refinery, do new ones, create an enabling environment for private participation. That is our position.

An economist, Sheriffdeen Tella said the removal of subsidy is not a good way to start for a new government, adding that high inflation may plunge the country into a crisis.

“I believe the removal of fuel subsidy is a game planned to stop loopholes in government pocket, probably they have realised that the amount purported is not true. If somebody is intending to come in and he is already telling us that he is going to remove subsidy, he probably knows something about the problem with the payment and probably thinks it is not genuine,’’ he submitted.

But Prof Adeola Adenikinju said removal of fuel subsidy remains the best way to solve the country’s revenue crisis and penury, adding that the next government must as a matter of urgency end it.

He said, “Any leader that wants to help us in this country should remove fuel subsidy. It has also been a consensus idea amongst major presidential candidate that the cost is becoming unbearable as it becoming clear to labour congress and Nigerians that it is triangulating our economy. Next year remains the best time to totally remove subsidy.’’

Speaking in Kano on Sunday, Tinubu declared that he would devote 100 per cent of his time and energy to serving Nigerians if elected.

This was contained in a statement released in Abuja by Tinubu’s Media Officer, Tunde Rahman, shortly after his interactive session with members of the popular Tijjaniyyah sect in Kano.

The statement partly read, “I won’t be a part-time President who will share time between living in Dubai and Nigeria. I would concentrate attention and energy on confronting and surmounting Nigeria’s pressing challenges.”

Endorsing Tinubu’s ambition, the sect demanded that his presidency should ensure the inclusion of their members in the cabinet and other government appointments, reduction in Hajj fares and assistance in concluding Tijjaniyyah University under construction in Kano.

Responding, Tinubu said the answers to their demand lie in his manifesto, which was unveiled on Friday by the President.

While assuring the northern business leaders of a better business environment with well-thought-out policies, Tinubu identified the link between Kano as a centre of commerce and his economic plan for Nigeria.