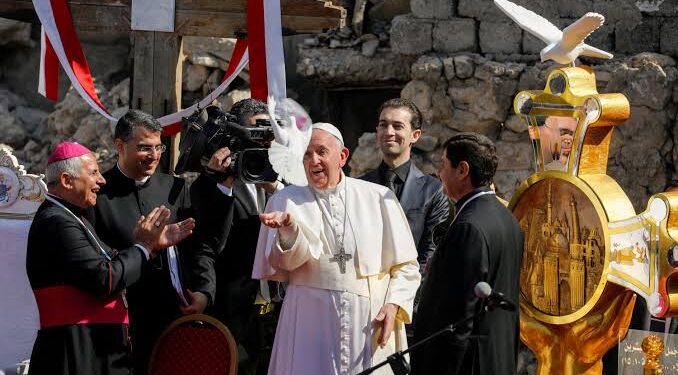 Pope arrives in Erbil and is expected to visit Mosul, visit small Christian community of Qaraqosh.

Pope Francis arrived in northern Iraq, where he is planning to pray in the ruins of churches damaged or destroyed by fighters from the ISIL (ISIS) armed group and celebrate an open-air Mass on the last day of his visit to the country.

The 84-year-old pontiff is currently on the first-ever papal visit to Iraq, where the Christian community has dwindled after years of war and persecution.

The setting will be a city square surrounded by the remnants of four damaged churches belonging to some of Iraq’s myriad Christian denominations.

He is then expected to travel by helicopter across the Nineveh Plains to the small Christian community of Qaraqosh, where only a fraction of families has returned after fleeing the ISIL onslaught in 2014.

The pope will then return to an Erbil stadium where he will hold a Mass that is expected to draw as many as 10,000 people.

He landed in Baghdad on Friday for the four-day trip, defying the global pandemic and security concerns after a series of recent attacks in Iraq.

During his trip, the pope has already visited churches in Baghdad, met top Shia cleric Ali al-Sistani and held an interfaith meeting in the ancient city of Ur in today’s southern Iraq.

The Vatican hopes the landmark visit will rally the country’s Christian communities and encourage them to stay despite decades of war and instability.

Iraq declared victory over ISIL in 2017 and, while the armed group no longer controls any territory, it still carries out sporadic attacks, especially in the north.

The group’s brutal three-year rule of much of northern and western Iraq, and the gruelling campaign against it, left a vast swath of destruction.

Many Iraqis have had to rebuild their homes at their own expense. Iraq’s Christian minority was hit especially hard. The armed fighters forced them to choose between conversion, death or the payment of a special tax for non-Muslims.

There were once more than one million Christians in Iraq, but now their population is estimated to be between 250,000 and 400,000 after years of war, religious persecution and steep economic decline.