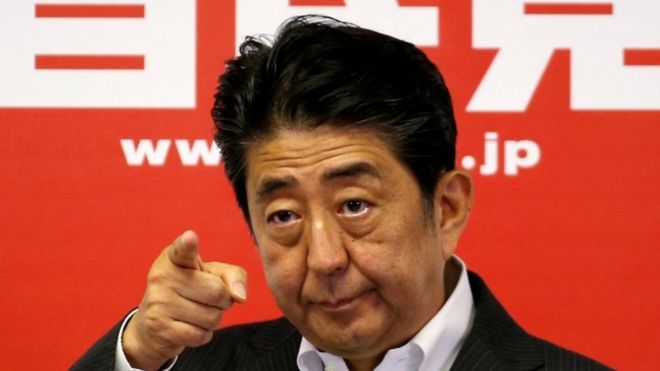 Japanese PM Shinzo Abe is set to announce his resignation for health reasons, officials from his party say.

He has suffered for many years from ulcerative colitis, an inflammatory bowel disease, but his condition is thought to have worsened recently.

It appears that he will not step down on Friday but continue to serve until a successor is selected by his ruling Liberal Democratic Party (LDP).

In 2007 he resigned abruptly from an earlier term as prime minister because of his struggles with ulcerative colitis, a chronic condition affecting the large intestine, that he has lived with since he was a teenager.

Mr Abe has a reputation as a staunch conservative and nationalist, and for stimulating growth with his aggressive economic policy known as “Abenomics”.

He has strengthened Japan’s defences and boosted military spending, but has been unable to revise the constitution’s pacifist Article 9, which bans a standing army for anything other than self-defence.

Prime Minister Abe has long suffered from chronic ulcerative colitis. The disease forced him to resign in 2007 – the first time he headed the government.

Now, after weeks of speculation about him being absent from the public eye despite a worrying uptick in Japan’s coronavirus cases, it seems he is resigning yet again due to the same illness.

As the longest-serving Japanese prime minister, he leaves behind a legacy of stability and a strong centralised power base that allowed forceful stimulus policies to revive the economy. He also improved relations with the US by courting President Donald Trump, often on the golf course.

Yet his government was also mired in scandal, including talk of favouritism and wilful destruction of public records. When the pandemic struck, his responses were often criticised as being slow, ineffective, and out of touch.

And perhaps importantly for Mr Abe, his cherished – and highly controversial – wish to revise Japan’s pacifist constitution under his watch, has come to naught, at least for now.

Why are there concerns?

Two hospital visits in one week sparked questions about whether Mr Abe’s health was deteriorating. He had been due to serve until September 2021.

He has not revealed what the visits were for but one is reported to have lasted nearly eight hours.

LDP officials have previously dismissed speculation that he would step down, saying the prime minister’s health was fine.

On Tuesday one of his aides told Reuters that he thought Mr Abe would fulfil his tenure.

Akira Amari, head of the LDP’s tax panel, dismissed the suggestion that the prime minister would dissolve parliament’s lower house for a snap general election soon.

“There won’t be a snap election for the time being,” he said.

Still, rumours have persisted about Mr Abe’s growing fatigue as he fields growing scrutiny for his handling of the coronavirus pandemic, at a time when approval ratings for his cabinet have dropped.

What happens if Mr Abe is incapacitated?

Under Japanese law, an acting prime minister would step in temporarily if Mr Abe were unable to perform his role, with no limits on how long they can stay in post.

An acting prime minister cannot call a snap election but they lead on other matters such as treaties and budgets until a new party leader and premier is chosen.

What happens if Mr Abe resigns?

A resignation or an announced intention to resign would trigger a vote within Mr Abe’s LDP to replace him as president.

This election would be followed by a parliamentary vote to elect a new prime minister.

The winner would hold the post until the end of Mr Abe’s term in September 2021.