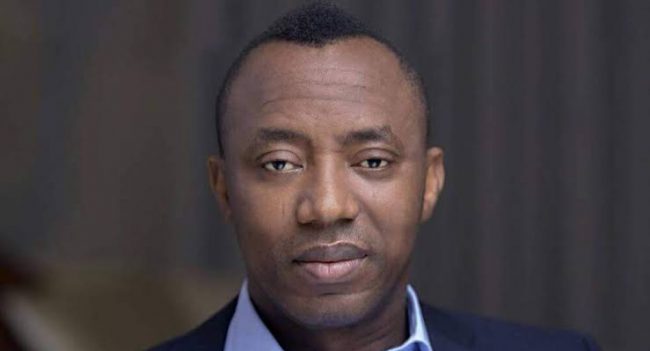 Sowore said both the ‘teams A and B’ of the group goofed, as “they can not decide for the South-West.”

This is coming on the heels of another purported endorsement of the presidential candidate of the All Progressives Congress, Bola Tinubu, by the founding father and a leader of Afenifere, Pa Reuben Fasoranti, on Sunday, in Akure, the Ondo State capital.

Tinubu received the endorsement during a meeting he had with the leaders of the organisation at Fasoranti’s residence in Akure.

Some members of the group, including Pa Ayo Adebanjo, and the Secretary-General Chief Sola Ebiseni, were however absent at the meeting.

Reacting on Monday, Sowore said, “Afenifere TEAM ‘A’ & Afenifere ‘B’ ought to know they goofed, they can’t sit in their living rooms and endorse candidates on behalf of South-West, they are too fiercely independent to fall for these crooked endorsements. They’ll always vote their conscience!”

Afenifere, led by its current leader, Adebanjo, had earlier endorsed the candidacy of Peter Obi of the Labour Party.

Adebanjo, therefore reacted to the purported endorsement of Tinubu, saying the position of the group backing Obi had not changed.

Adebanjo, in a telephone interview with one of our correspondents on Sunday, said he was not supposed to be at the meeting in Akure, adding that his support for Obi was already known.

He said, “In the first place, I was not supposed to be there. In the second place, we have made our position clear. Pa Fasoranti asked me if I was coming, I said if he asked me to come. But tell him what the position of Afenifere is. Once he has done that, I’m not going into any controversy about that.

“Afenifere has taken a stance to support Obi. Any other splinter or rebel group… I’m not going into any controversy about that. I regard that as a diversion. What we are going to do now is see that we succeed at the election.”

Fasoranti, who briefly prayed for the APC candidate, simply declared, “Tinubu will win the election.”

Omololu explained that Tinubu briefed the gathering about his aspiration for the presidency and also presented his manifesto to Fasoranti.