Tinubu Touches Down in Lagos Amidst Massive Rousing Welcome 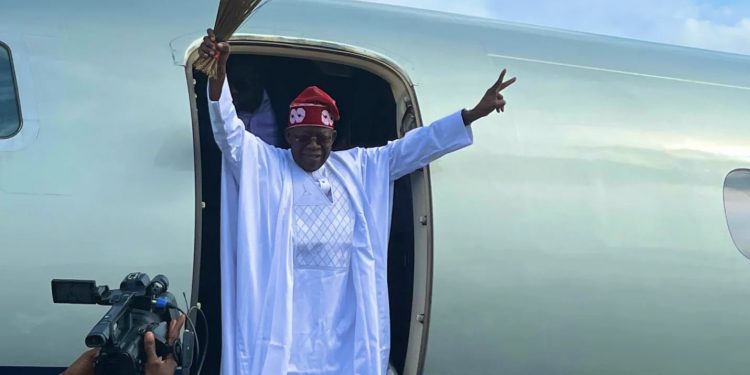 Some parts of Lagos were on standstill yesterday afternoon for Asiwaju Bola Ahmed Tinubu, who returned home to a rousing reception eleven days after clinching the All Progressives Congress (APC) presidential ticket in Abuja.

He arrived at about 3:40pm to the warm embrace of a huge crowd of party faithful, supporters and well-wishers.

They lined the streets from the Presidential Wing of the Murtala Mohammed International Airport, Ikeja to the Iga Iduganran Palace of Lagos monarch, Oba Rilwanu Akiolu.

Also with them were Senator Tokunbo Abiru (Lagos East), House of Representatives member James Faleke, among others.

Alighting from the plane, Tinubu waved his broom at the supporters who had waited patiently for hours. He was ushered into a waiting bus.

The excited supporters accompanied the long convoy through the Airport Road, Oshodi-Oworonsoki-Third Mainland Highway to the palace.

A large crowd converged on the Oshodi flyover, cheering as the convoy snaked through.

The initial plans for a grand reception for the one-time Lagos governor at the main bowl of Teslim Balogun Stadium in Surulere was cancelled since embargo had not been lifted on political campaigns by the Independent National Electoral Commission (INEC).

The road to Oba Akiolu’s palace was filled with admirers who waved flags and brooms to welcome Tinubu.

At the Iga, there was a mini carnival by residents who trooped from adjoining streets to the palace. They danced to blaring music from a disc jockey. They had also hung large posters and banners welcoming Tinubu back home.

Oba Akiolu congratulated Tinubu on his emergence as the APC presidential candidate. He urged him not to be afraid but forge ahead.

He said: “The Bible says: ‘do not fear, just watch, it will bring forth good news to you.’ All will be well with you and everything will work in your favour.

“We are going to start a new journey and it will be beneficial. May God never lead us astray. God will continue to do us good. To our governor, may the Lord give you peace of mind; you will prosper, grow old and live long.”

Tinubu appreciated the people for the warm welcome. He specially thanked the party chieftains for believing in him and supporting his dream.

The candidate said he was glad to be back home, saying: “The son of the soil is back.

“I am happy to be back at home, and today is Father’s Day. The son of the soil is back at home.”

Addressing the monarch, he added: “Baba you will live long; God won’t take us from you. All your prayers are being answered. Thank you for the prayers you said for me in London; the warnings you gave me I haven’t violated. I remain a true son.”

The party thereafter left for Tinubu’s Bourdillon residence in Ikoyi where members of the state Executive Council and other party chieftains received him.

Ojelabi said the large crowd affirmed “the greatness of our leader, not because of his towering personae or astuteness, rather, we are here to reaffirm our values and our commitments to a strong umbilical cord held by us, and to the legacy of our forbearers, and the promise of future generation”.

Ojelabi reiterated the APC’s mission to “fight for the most vulnerable communities, protect working families and ensure that we live up to the promises of the Lagos dream”.

He added: “Fellow progressives and well-meaning Lagosians, I say to you today that we have more work to do. More work to do for the ordinary Nigerian, who is having challenge of insecurity and loss of our social and core values.

“People don’t expect government to solve all their problems. But they sense, deep in their bones, that with just a slight change in priorities, we can make sure that every child in Nigeria has a decent shot at life, and that the doors of opportunity remain open to all. They know we can do better, and they want that choice.”