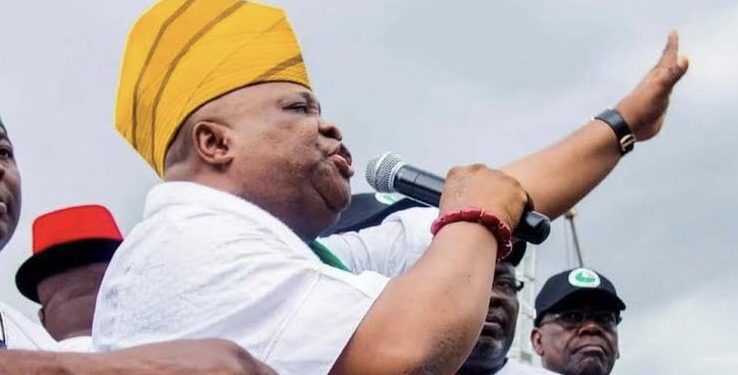 The Election Petition Tribunal hearing case emanating from the July 16 governorship election in Osun State was forced into adjournment on Thursday following presentation of blurry documents used by the Governor Ademola Adeleke for 2018 elections.

The panel had last week Friday ruled that INEC chairman should bring Adeleke’s filings for 2018 poll on its next sitting.

At the day’s proceedings, after checking the documents presented by INEC, counsel to the petitioners, Lateef Fagbemi, SAN, who appeared with Akin Olujinmi, SAN, told the panel that two out of the pages were not clear enough.

Fagbemi said section for scores obtained by the candidate on the GCE result was blank, adding that the address of the school that awarded the testimonial was not also clear enough.

But counsel to INEC, Prof. Paul Ananaba, SAN, said the copies were clear and readable, urging the plaintiffs to allow the documents to be admitted, since they had earlier claimed that they had CTC copies of the documents which could be presented.

He assured not to object to the documents if presented by the plantiffs.

They, however, said the documents were still rectifiable and urged the petitioners to call their next witness, while INEC should be made to present a clearer copies, if they have.

Ananaba later called for stand down of the matter to enable him obtain screenshots of the documents from the INEC headquarters in Abuja.

After the panel had reconvened, Ananaba presented both colour and back and white copies made from the screenshots obtained from INEC head office, which he also admitted were not better than the copies earlier presented.

He sought adjournment to enable INEC brought before the panel, the file from which the copies earlier presented were made from.

Fagbemi, however, insisted that the order of the court was that clear documents should be presented, saying the respondents must comply with the directive.

Reading the ruling of the panel, the Tribunal Chairman, Justice Tertse Kume, adjourned the matter till Saturday for the INEC to bring the original file containing the documents.