Ukraine war: EU moves to cut peak electricity use by 5% 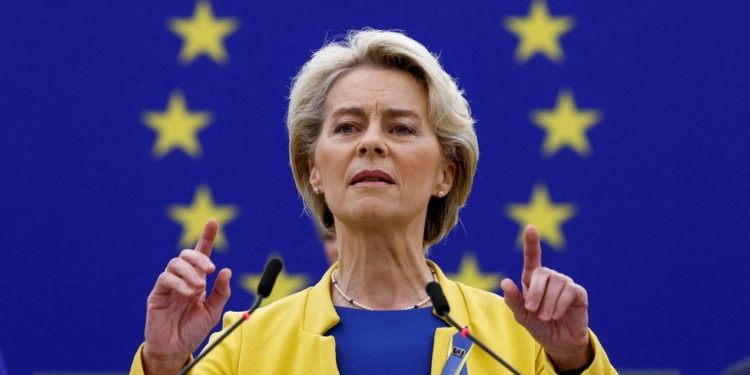 EU chief Ursula von der Leyen has called for cuts to electricity use across the bloc and windfall taxes on energy firms to tackle high prices.

She told the European Parliament that gas and electricity prices had hit all-time highs after Russia’s invasion of Ukraine.

She called for electricity consumption to be cut at peak hours by at least 5%.

But plans for a cap on the price of natural gas, a key Russian export to the EU, were put on hold.

The plan outlined in Strasbourg targets “excess revenues” with proposals to skim the profits of low-carbon electricity producers and implement a de facto windfall tax on the oil, gas and coal sectors.

The EU’s member states will pore over the proposals with hopes of an agreement by the end of this month.

Mr Zelensky’s wife Olena was in the parliament as guest of honour to hear the speech.

Ms von der Leyen said that “making ends meet” was “becoming a source of anxiety for millions of businesses and households”.

“In these times it is wrong to receive extraordinary record revenues and profits benefiting from war and on the back of our consumers,” she argued.

‘Russia’s industry is in tatters’

Defending EU sanctions on Russia, she said: “This is the time for us to show resolve, not appeasement.”

“Russia’s financial sector is on life-support,” she asserted, with nearly 1,000 international companies having left the country.

“The Russian military is taking chips from dishwashers and refrigerators to fix their military hardware because they ran out of semiconductors. Russia’s industry is in tatters.”

Russia has so far largely managed to avoid the economic meltdown predicted back in the spring when sweeping sanctions were imposed. It has cushioned the blow with revenue from oil and gas sales.

Ukraine has officially been a candidate for accession to the EU since June.

It recently began a counter-offensive to drive back Russian troops, reportedly regaining thousands of sq km of territory in the east and the south this month.

“This is the time for us to show resolve, not appeasement,” said Ms von der Leyen. “We are in it for the long haul.”

It was her conviction, she said, “that with courage and solidarity, [Russian President Vladimir] Putin will fail and Europe will prevail”.

Russia, a global energy supplier, is locked in an economic struggle with the EU which imposed sweeping sanctions in response to the invasion.

Before the invasion, Russia accounted for 40% of the EU’s imported gas. That figure has since fallen to below 10%.

This summer, European gas prices were about 10 times higher than their average level over the past decade.

A portion of the gas is also burnt to generate electricity, meaning that high gas prices push up power bills too.

Ms von der Leyen said EU states had managed to stockpile gas reserves for the winter to 84% of capacity, well ahead of an October deadline.

She named the US, Norway and Algeria as “reliable” gas suppliers.

She also announced plans to set up a European hydrogen bank to promote investment of up to €3bn in that fuel as a green alternative to fossil fuels.

Sending a message about European resolve

State of the Union speeches are always wide-ranging and, in that sense, this one was no different. But of course the circumstances have dramatically changed from Ursula von der Leyen’s last address, one year ago.

The fallout from Russia’s invasion of Ukraine has exacerbated an energy crisis that is now the dominant issue within the bloc. Deep, longer-term, energy market reforms are being mooted but I understand those will not be ready until next year.

The European Commission president was trying to send a message about European resolve this winter. Sanctions against Russia were “here to stay”, she said. But questions still hang over the EU’s readiness to impose more penalties against President Putin, while promises of integrating Ukraine more into the EU’s orbit and economy will be closely watched by its government and citizens.

William and Harry to walk behind Queen's coffin to Westminster Hall