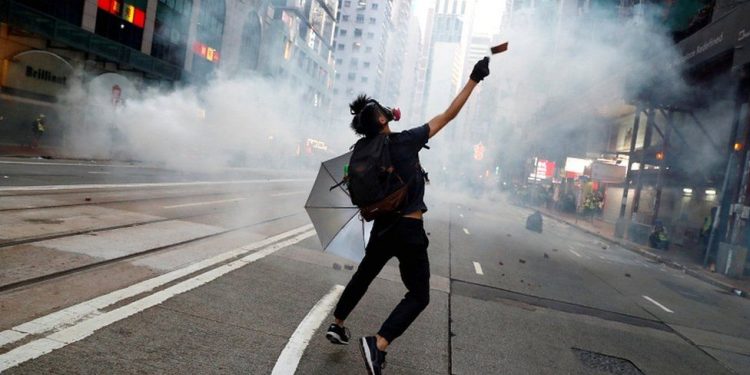 Thousands of Hong Kong residents are to be offered a temporary “safe haven” in the US, President Joe Biden says.

Mr Biden said that because Hong Kong’s freedoms were being violated by China, the US would allow visitors to stay for a period of 18 months.

Thousands of Hong Kong residents already in the US may benefit.

China has reacted angrily to the announcement, describing the decision as a gross interference in Hong Kong’s internal affairs.

The UK has offered people from Hong Kong a path towards permanent residency following last year’s adoption of China’s security law for the territory.

The law criminalises what are deemed to be acts of secession, subversion, terrorism and collusion.

He said China had been “undermining its remaining democratic processes and institutions, imposing limits on academic freedom, and cracking down on freedom of the press”.

He pointed to the arrests of more than 100 people, including activists and opposition politicians, under the new security regime.

Liu Pengyu, the spokesman for China’s embassy in Washington, criticised the US government’s actions, which he said “disregard and distort facts, and grossly interfere in China’s internal affairs”.

The Chinese foreign ministry’s Hong Kong office said the US had engaged in a “plot to oppose China and stir up trouble in the city”.

Maggie Shum, a researcher in the US, said many students had been left in limbo amid uncertainty about returning to Hong Kong and welcomed Thursday’s news.

Samuel Chu of Washington-based Hong Kong Democracy Council, which campaigned for the move, says the group estimates that it could affect some 100,000 people.

“It is a significant number because, I think, its a pretty good chance that a pretty large number of visitors would benefit from this,” he told the BBC.

“Partly also because the situation in Hong Kong has been unfolding pretty publicly, and you’ve seen people travelling and leaving Hong Kong in droves, not just to the US but other countries.”

Those who have serious criminal convictions will reportedly not be eligible to stay.

The move is the latest action Mr Biden has taken to combat what he says is an erosion of democracy in Hong Kong.

In July, the US government warned firms over the risks of doing business in Hong Kong under the security law.

In January, the UK introduced a scheme allowing residents of the former British colony to come to the UK for up to five years and apply for permanent residency. It launched the visa after China imposed the security law.

The British government estimates 5.4 million Hong Kong residents are eligible for the scheme, and expects 300,000 people to take up the offer in the first five years.