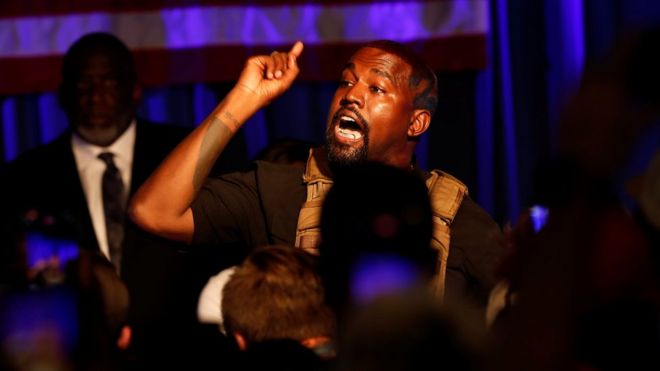 West addressed the crowd without a microphone

Elon Musk on Friday kicked Kanye West off Twitter “for incitement to violence” after the rapper posted a picture that appeared to show a swastika interlaced with a Star of David.

The post came hours after an interview with conspiracy theorist Alex Jones, in which West sparked outrage by declaring his “love” of Nazis and admiration for Adolf Hitler.

West had also shared a picture of a shirtless Musk getting sprayed with water, tweeting, “Let’s always remember this as my final tweet.”

In response, Musk said, “Just clarifying that his account is being suspended for incitement to violence, not an unflattering pic of me.”

Musk, who previously called himself a “free speech absolutist,” has repeatedly said he believes all content permitted by law should be allowed on Twitter, and sought to remake the social media organisation after he took control in October.

In an hours-long appearance on Infowars, the show fronted by Jones, West – now known as Ye – wore a black mask completely covering his face, as he ranted about sin, pornography, and the devil.

West hid his face completely under a mask that had neither eye nor mouth slits.

However, Jones addressed him as West as they spoke, Infowars billed the interview as being with West, and at one point, Jones took West’s cellphone and posted a tweet on his account that appeared in real-time.

West, who has hinted he is running for US president in 2024, has spoken openly about his struggles with mental illness, but his erratic behavior has continued to raise concerns.

The businessman has seen his commercial relationships crumble after a series of anti-Semitic comments, as the one-time titan of fashion and music appears to have entered a disturbing spiral.