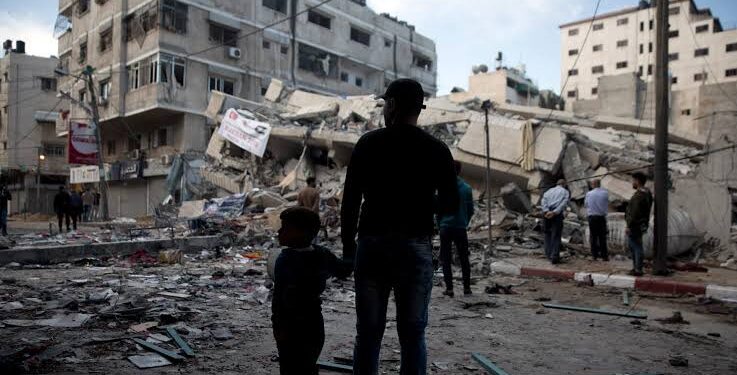 At least 24 Palestinians have been killed in Israeli air raids on the besieged Gaza Strip, according to the Palestinian health ministry, after Hamas launched rockets from the coastal territory towards Israel.

At least three civilians were killed at dawn, after an Israeli warplane targeted a house in al-Shati’ refugee camp.

A spokesman for the civil defense in Gaza, Raed al-Dahshan, told Al Jazeera that among the three was a woman and a disabled man.

The Gaza health ministry said the death toll from the Israeli attacks has risen to 24 people, including one nine children. At least 106 others were wounded.

Translation: Mohammed Nseir from the Gaza Strip has been martyred by an Israeli attack, on the same day his wife gave birth to their child. One heart beats while another stops.

Most of the children belonged to the same extended family. Two siblings, 11-year-old Ibrahim and seven-year-old Marwan, were the only children of Yousef al-Masri.

The children were playing outside their homes before the Ramadan iftar meal in Beit Hanoun, in the northern Gaza Strip, before two explosions rocked the street.

Translation: Rahaf Mohammed Attallah al-Masri, a Year 4 student in my school. She sat on the first desk next to the classroom door. Her face is sweet, and she’s a hardworking and polite student. Our martyrs are not numbers, and anyone who knows details about those killed should share them.

Earlier Hamas, the ruling entity in Gaza, fired dozens of rockets into Israel, including a barrage that set off air raid sirens as far away as Jerusalem, after hundreds of Palestinians were wounded by Israeli forces which stormed the Al Aqsa Mosque compound in occupied East Jerusalem.

Hamas had given Israel an ultimatum that it stand down forces from Al Aqsa, the third holiest site in Islam which is also revered by Jews.

Tensions in Jerusalem have been fuelled by the planned forced expulsions of Palestinian families from the Sheikh Jarrah neighbourhood and by an Israeli forces raid on Al Aqsa on one of the holiest nights of Ramadan.

Prime Minister Benjamin Netanyahu warned of an open-ended operation against Hamas. In a speech, Netanyahu accused the group of crossing a “red line” with the latest rocket fire and promised a tough response. “Whoever attacks us will pay a heavy price,” he said.

The Israeli army said a civilian in the country’s south suffered mild injuries when a vehicle was struck by an anti-tank missile from Gaza.

Abu Obeida, spokesman for Hamas’s military wing, said the attack on Jerusalem was a response to what he called Israeli “crimes and aggression” in the city. “This is a message the enemy has to understand well,” he said.

He threatened more attacks if Israeli forces re-enter the Al Aqsa Mosque compound or carry out forced expulsions of Palestinian families from an East Jerusalem neighbourhood.

More than a dozen tear gas canisters and stun grenades landed in the mosque as police attacked protesters inside the walled compound that surrounds it.

More than 300 Palestinians were injured by armed Israeli forces, including 228 who went to hospitals and clinics for treatment, according to the Palestinian Red Crescent. Israeli police said 21 officers were hurt, including three who were hospitalised. Israeli paramedics said seven Israeli civilians were also hurt.

As a result, and in an apparent attempt to avoid further confrontation, Israeli authorities changed the planned route of a march by right-wing, ultra-nationalist Israelis through the Muslim Quarter of the Old City to mark “Jerusalem Day”, which celebrates Israel’s capture of East Jerusalem. East Jerusalem is not internationally recognised as Israeli territory.

Monday’s confrontation was the latest after weeks of almost nightly attacks by Israeli troops in the Old City of Jerusalem against Palestinian protesters, during the Muslim holy month of Ramadan.

On Saturday, more than 250 people were wounded after Israeli forces entered Al Aqsa during Laylat ul-Qadr, one of the holiest nights in Islam.

The tensions in occupied East Jerusalem have been fuelled by the planned forced expulsions of dozens of Palestinians from the Sheikh Jarrah neighbourhood, where illegal Israeli settlers are looking to take over the properties of Palestinian families.

Residents of the neighbourhood and local and international solidarity activists have attended vigils in recent days to support the Palestinian families under threat of forced expulsions.

Israel’s Supreme Court on Monday postponed a key ruling in the case, citing the “circumstances”.

“We’ve heard people chanting slogans in support of those in East Jerusalem and Sheikh Jarrah, chanting for freedom, for Palestinians not to be evacuated from their houses.”

The United States and European Union have expressed deep concern over the unrest in East Jerusalem, urging Israel to calm the situation and not carry out the forced expulsions. Arab allies of Israel, along with Turkey, have also condemned Israel’s actions.

Israel captured East Jerusalem, the West Bank and the Gaza Strip in the Six Day War of 1967.

It later unilaterally annexed East Jerusalem and considers the entire city its capital, a move not recognised by the vast majority of the international community. The Palestinians seek the occupied territories for a future state, with East Jerusalem as the capital.