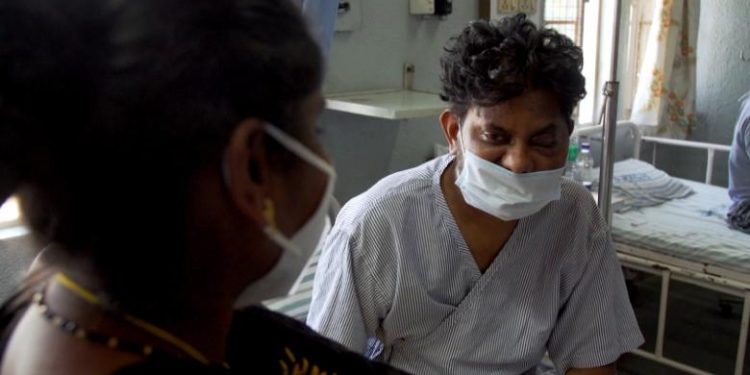 Srinivas S. lies on a gurney in an operating theater in St John’s Hospital in Bengaluru as surgeons carefully remove bits of blackened tissue and rotten bone from his face.

The 41-year-old driver is one of more than 45,000 Indians infected with black fungus — or mucormycosis — since the start of the country’s second Covid-19 wave in late March.

Like Srinivas, the vast majority of sufferers — around 85% — were Covid-19 patients, according to India’s Health Ministry. By July, more than 4,300 people had died from the fungal infection.

Srinivas’s sister Shyamala V. sits by his bed and considers what life will be like for her brother’s wife and two young sons, ages 2 and four months, if he becomes one of them.

“I am very scared for him; he has two small kids. Who will look after them?” she said.

Black fungus is India’s second Covid crisis. Before this year, the infection was rare in India, though it was around 80 times more common there than in developed countries.

It’s caused by mucormycetes, a type of fungi, that people are exposed to every day, but when their immune systems have been battered by Covid they become more vulnerable to infection. Unless treated quickly, black fungus can cause permanent damage to the face, loss of vision and death — it has a mortality rate of over 50%.

Cases have surged in India, and a small number of cases have been detected elsewhere — in Nepal, Afghanistan, Egypt and Oman, according to their respective health ministries.India’s black fungus cases numbers are far higher now than after the country’s first coronavirus wave last September. That may be due to the rapid spread of the Delta or B.1.617.2 variant of the virus.

Diabetes causes elevated blood sugar levels — perfect conditions for a fungus that feeds on sugar. In India, at least 77 million people had diabetes as of 2019, second only to China which had 116 million (the United States had 31 million) according to the International Diabetes Federation — which partly explains why Indian black fungus cases are comparatively high.

Srinivas, who only uses one name, thought he was over the worst of Covid-19, but his left eye soon started swelling so much he could barely open it. The pain was excruciating.

He had never heard of black fungus but became concerned when his eye and nose started bleeding in May. “A lot of blood was coming out, so I thought, what is happening?” Srinivas told CNN from his hospital bed before his third operation to remove infected tissue.

Srinivas said he went to four hospitals before doctors diagnosed him with black fungus and referred him to a fifth hospital where he finally received treatment.

Before the pandemic, India had about 3,000 to 4,000 cases of mucormycosis each year, according to figures provided to the Indian Parliament by Health Minister Mansukh Mandaviya.

Back then, the illness wasn’t notifiable, meaning states weren’t obliged to report cases to the central government. That changed in May as case numbers grew. By the end of June, more than 40,845 cases had been reported nationwide.

Two weeks later, that number had risen by around 9% to 45,374. Of those patients, around half are still receiving treatment, the Health Ministry said on Tuesday.

A shortage of drugs

There is no quick fix for mucormycosis. Patients undergo surgery to remove infected tissue in a procedure known as debridement. They are then treated with the antifungal medication liposomal amphotericin B to keep the infection from resurging.

As case numbers rose in May, several states reported shortages of the drug and India’s Ministry of Chemicals and Fertilizers stepped in to regulate supplies. An extra five companies were approved to produce the drug in India, and new import orders were placed.

“We have gone all over Bangalore looking for the injection, but even private hospitals have to ask for the drug from government hospitals. It’s simply not available anywhere,” Shyamala said.

The drug — expensive at about $95 a dose — is not available outside hospitals. Srinivas’ family has been relying on help from his employers and low interest loans to pay for the drug and for the private hospital fees.

Three doses are needed a day for at least 28 days, doctors say, meaning the cost of treatment could be as high as $8,000 — out of reach for many poorer Indians.

Mandaviya, India’s health minister, said when reports of mucormycosis emerged in May, India produced about 150,000 vials of amphotericin B. “The world helped us at that time … wherever in the world there was amphotericin, it was sent to us and we imported 1,300,000 vials of the drug,” Mandaviya said on Tuesday.

“I admit that it is possible that some people still did not get the drug, but the government did everything it could,” he added.

Several factors are behind the rise of black fungus in patients after India’s second Covid wave, according to doctors — including the drugs used to treat it.Senior health officials from India’s Covid taskforce and the All India Institute of Medical Sciences said the overuse of steroids to treat Covid-19 had suppressed patients’ immune systems and made them more susceptible to black fungus.

Under India’s Covid management protocols, steroids can be prescribed in moderate and severe cases of Covid, though the latest guidelines issued in May advise “judicious use” to prevent and manage conditions like mucormycosis.

Some doctors also suspect a shortage of medical-grade oxygen may have played a role, arguing that prolonged low levels of oxygen can make patients more vulnerable to infection.

Some doctors believe there may be a link between the rise in black fungus infection and the Delta variant, a more transmissible Covid strain first detected in India in December.

Since then, the Delta variant has spread to 96 countries, and World Health Organization expects it to soon become the world’s most dominant strain.

While several studies have confirmed that patients with Covid are more vulnerable to black fungus, researchers have not determined if the Delta variant creates greater risk factors than other strains.

India’s second Covid wave has passed, but there are fears of a third wave and what could mean for black fungus outbreaks in India. The infection is not contagious between people, but clearly the environment is suitable for its spread.

So far, no other country has reported a sharp rise in cases — even as the Delta variant spreads worldwide. For example, by mid-June, the Delta variant accounted for 99% of Covid-19 cases in the UK but no cases of mucormycosis had been reported.

Srinivas is a Covid survivor, but it will be some time before he’s able to return to work. He was unable to speak for weeks after his surgery to remove traces of black fungus, initially due to pain and swelling, then because a feeding tube had been inserted due to the loss of part of his jaw.”I can see … I feel good, I’ll try to get back to work as soon as possible. I have two small kids. I have been in the hospital for a very long time and I haven’t even seen them,” Srinivas said in early July.

Srinivas was discharged last Saturday after two months in the hospital, though his left eye remains swollen shut, and he must visit the hospital each week to monitor his progress.”I don’t think he can go back to work before a year, said his sister Shyamala. “But it will be difficult to make him stay home.”

Buhari Jets Out To London For Medical Check-up, Education Summit