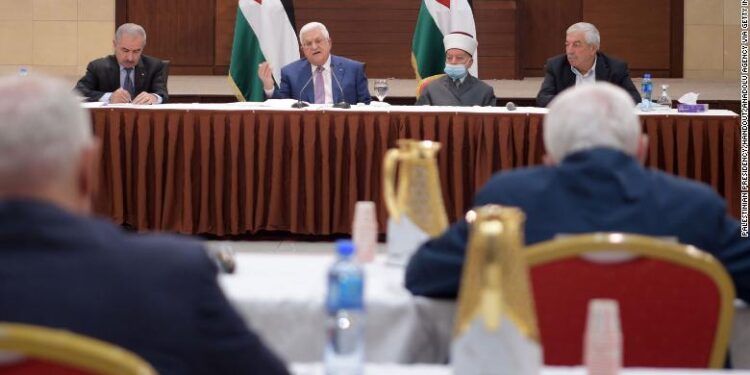 Mahmoud Abbas makes a speech on as he attends the Palestinian Leaders Meeting in Ramallah, West Bank on April 29, 2021.

Palestinian Authority President Mahmoud Abbas has announced the postponement of planned parliamentary elections, saying Israel has failed to confirm it will allow voting in East Jerusalem.

The announcement ends weeks of mounting speculation that Abbas would nix the vote and looks certain to trigger a blame game involving the international community, as well as widespread frustration among Palestinians, who were set to vote in popular elections for the first time in fifteen years.

Voting for the Palestinian Legislative Council was set to take place on May 22, with a vote for the Presidency scheduled for the end of July.

Speaking at a meeting of Palestinian factions in Ramallah on Thursday evening, Abbas said his decision to hold elections for the first time since 2006 had been an attempt to achieve national unity and end the division between the West Bank and Gaza.

But he said he had received a message earlier Thursday that Israel was unable to say whether it would allow voting to take place in East Jerusalem — seen as non-negotiable by Palestinians in the elections.

The reason given was Israel’s own political deadlock, Abbas said, adding that he did not accept this. “It is not a technical issue but a national political issue,” he told faction leaders.

The election will only be reinstated, Abbas said, when “the participation of our people in Jerusalem is guaranteed.”

Under the terms of the Oslo Accords, signed by Israel and the PLO in the 1990s, Palestinians living in Gaza, the West Bank and East Jerusalem are entitled to vote in Palestinian Authority (PA) elections.

The issue of whether votes can actually be cast in East Jerusalem is a sensitive one, because Israel regards all of Jerusalem as its sovereign territory, while Palestinians see the eastern part of the city as the capital of a future Palestinian state.

In the last election in 2006, Israel, under pressure from the United States, allowed voting to take place in a number of post offices in East Jerusalem.

In Ramallah Thursday, Abbas lashed out at the United States and the European Union for failing to put enough pressure on Israel to do the same this time.

“We asked the Americans: ‘Where are you?’ They said, ‘We are here.’ We told them we want them to take a position [on holding elections in East Jerusalem] but we did not hear a position from them. After that we sent letters to Europe asking, ‘Where are your promises to stand by us?’ And no answer came back.”

In the wake of the postponement, Abbas said he wanted to try to form a government of national unity that would adhere to international resolutions.

Israel’s Foreign Ministry has not yet responded to Abbas’s speech but earlier an Israeli official told CNN that Israel “had not given an answer on voting in East Jerusalem; neither a yes, nor a no.”

Thirty-six parties submitted a list of candidates for the parliamentary election, according to the Palestinian Central Elections Commission, which also said some 93% of the 2.8 million eligible voters had registered to cast a ballot.

Ahead of the deadline to submit party lists, the main Fatah movement of President Abbas split, with veteran diplomat Nasser Al Kidwa, a nephew of the late Palestinian leader Yasser Arafat, submitting a rival list of candidates, which received the blessing of Marwan Barghouti, a popular Palestinian leader jailed by Israeli in 2004 following his conviction on five counts of murder.

Another list that caught public attention was one formed by Abu Dhabi-based Mohammed Dahlan, who was a leading Fatah operative in Gaza before eventually falling out with Abbas and being expelled from the party in 2011.

Hamas, the Islamist group which runs Gaza and is regarded as a terrorist organization by Israel, the US and the European Union, also submitted a list.

Opinion polling conducted two weeks ago by Jerusalem Media and Communication Center (JMCC) in partnership with the German Friedrich Ebert Foundation showed Hamas in fourth place on 8.2% of the vote, against the main Fatah list, which the poll showed on track for 25% of the vote. Al Kidwa’s ‘Freedom’ list ranked second on 13% with Dahlan’s ‘Future’ list third on 9%.