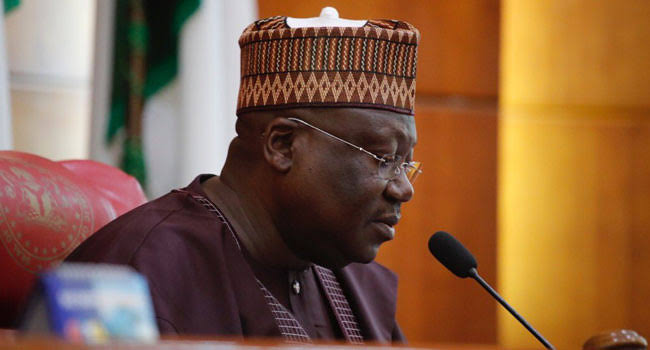 It further charged the agencies to prevent wasteful spending, while promising to be strict in its oversight duties.

President of the Senate, Ahmad Lawan, spoke in his address at the opening of an interactive session on the need to improve Internally Generated Revenue (IGR) of the Federal Government.

He said revenue generating agencies of government are capable of remitting N3 trillion yearly if efforts are made to cut down on wasteful spendings.

The interactive session was between the Senate leadership and members of the Committee on Finance and Revenue Generating Agencies of Government.

Lawan said: “In 2022, the National Assembly assumed, and rightly so, that our government-owned enterprises could generate up to N3 trillion if we are of the mindset that we can achieve that and, of course, ensure that we oversight to stall any possibility of unwarranted expenditures by agencies of government.

“But that does not mean in any way that it is going to be some kind of investigation on what you do, but an encouragement of what you need to do. The Senate will be firm on generating more revenue. We will continue to insist because we believe this is one sure way of reducing our deficit and borrowing.”

Lawan explained that the drive by the upper chamber for more revenues to the coffers of government would enhance the economy and facilitate infrastructural development.

Chairman of the Committee on Finance, Senator Solomon Olamilekan Adeola (APC, Lagos West), lamented that there was insufficient funds for the implementation of policies and projects captured in the 2022 budget.

He explained that the funds were derived partly from the revenue generated by government-owned enterprises and other independent revenues sources of the Federal Government.

He said for government to reduce and eliminate deficit budgeting, which has characterized Nigeria’s budget over the years, effort must be made to minimise borrowing to fund projects.

However, funding for the N17.126 trillion 2022 budget may not be realisable taking into cognisance complaints of some of these revenue generating agencies.

Director General of NAFDAC, Prof. Mojisola Adeyeye, lamented that the 2018, 2019 and 2020 budget of the agency were not passed by the National Assembly leading to warehousing of revenues generated by it for capital expenditure.

The Comptroller General of NCS, Col Hameed Ali (rtd), said some provisions of the 2022 Finance Act have robbed Customs of its operational mandate on some revenue collections. He specifically cited section 22 and 61(a) of the Act , incapacitating Customs from collecting some taxes like import duties.

“However, the amendment is so wide and open that it has hindered our ability to collect levies and other collections at NCS. Our understanding of the provisions is that all other laws, which mandated us to collect are inconsistent with the new Act.

“We have consulted with lawyers and the conclusion is that the Act is confusing and if other revenue generating agencies decided to act on the provisions, they may decide not to collect duties and levies,” he noted.

In similar vein, the Director of Finance, NIS, Prof. Aba George, said the N400 billion the agency is supposed to generate as revenue yearly is being cornered by a U.K.-based firm handling most of its outsourced services and operations.

According to him, contract on the outsourced services and operations given to the firm on behalf of NIS in 2003 gives government 33 per cent of proceeds, Immigration seven per cent while the remaining 60 percent is cornered by the firm.

“This is our seventh time of tabling this complaint before the Senate or the House of Representatives. Please rescue us from the hook of this firm.

“The contract was entered into without the knowledge of Immigration since 2003 and those behind it keep on renewing it and denying us about N400 billion revenue yearly. It is a rip-off and purely one-sided contract, bleeding Immigration and Nigeria financially,” he lamented.

The Senate President directed the Committee Chairman, Adeola, to summon the Ministry of Interior for all the contract documents.

FIRS had, last week, disclosed that it raked in N6.4 trillion as revenue in 2021. Chairman of the service, Muhammad Nami, had said despite limitations faced in 2020/2021, the agency achieved over a hundred per cent of its collection target.

Meanwhile, Agusto & Co, a foremost research, credit risks and credit management rating agency in Nigeria, has projected that the country’s debt-to-revenue ratio will cross 80 per cent mark in 2022 following the build up to the general election next year.

In their projections, the agency stated that in 2022, the major themes that would dominate Nigeria’s economic landscape are politics, management of the fiscal deficit, foreign exchange policy of the Central Bank and changes in prices and economic growth (or the lack of it).

According to the agency, “of all these factors, politics will dominate the landscape due to the general elections in 2023. Nevertheless, the dominance of politics in 2022 will not diminish the importance of the other major economic themes.