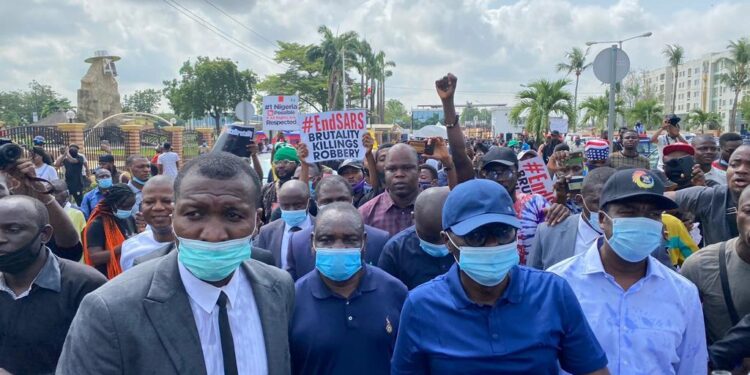 Continuing their peaceful demonstrations, Lagosians have today taken to the streets to protest against police brutality in the state, ignoring interventions from the Governor, Mr. Babajide Sanwo-Olu to end the demonstrations.

Today, the protesting Lagosians trooped to the Lagos State House of Assembly in the Alausa area of the state, ignoring and mocking Sanwo-Olu as he attempts to address them.

The protesters angrily demanded the governor explain where he was when some peaceful protesters were killed at Surulere, Lagos, yesterday.

Governor Sanwo-Olu addressed the five-point demands of the protesters, saying that he is working on actualising some of them.

Sanwo-Olu said some of the protesters that were arrested have been released, and he is looking into getting the rest of them out, as demanded by the protesters.

He also said that he will be meeting with the Inspector General of Police, Mohammed Adamu in Abuja later in the day, to discuss a reform of the police force and put things in order.

The governor added that a committee will be set up for the investigation of the killing of protesters and to discuss steps to getting justice for lives that were lost to police brutality.

The protesters, however, responded by singing Davido’s ‘Fem’, indicating that the governor was talking too much, without giving them any specifics.

Unsatisfied with the governor’s address, the protesters carried on with the protest walk, promising to proceed to sensitive road corridors to cause gridlock around the state.

More States Across the Nation have also joined the protest against the Special Anti-Robbery Squad (SARS/FSARS) of the Nigerian police force on Tuesday.