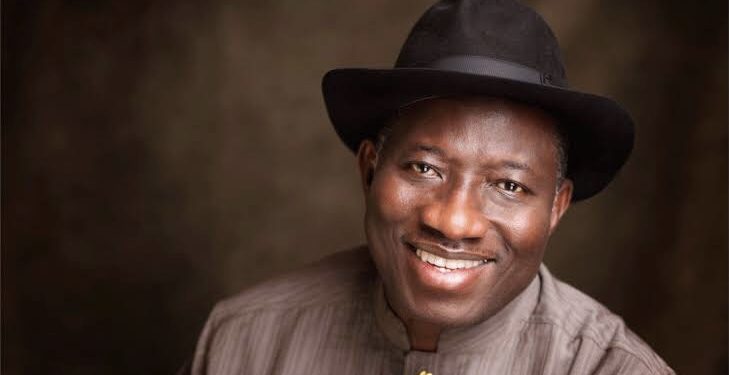 Former President , Dr. Goodluck Jonathan has called for support for victims of the devastating flood that has killed hundreds and destroyed several property in many states across the country.

The former President in a statement released by his office on Thursday, after he visited Otuoke, his community and other affected areas in Bayelsa State, lamented that this year’s heavy flooding resulted in an unprecedented humanitarian crisis in most affected states, adding that the situation required urgent action and collaboration by all stakeholders.

Jonathan noted that many states are now helpless, including Bayelsa, his home state with more than 70 per cent of its land area already submerged.

The former president said: “I sympathise with the victims of this year’s flood across many states of the federation who have lost loved ones and properties worth millions. “The worsening humanitarian crisis in the affected states calls for urgent action and collaboration by all stakeholders.

“I am touched by the dire situation in some of the affected states, especially my home State Bayelsa where almost all the local government areas are submerged in water and the East-West Road section leading to the State has become impassable, creating scarcity of food and essential commodities.”

He added: “Today, I visited Otuoke, my community and a few other communities in Bayelsa State to assess the impact of the flood. It is still a depressing situation in many of the affected communities because of the magnitude of the flood and the disruption and destruction it has caused.

“This is a moment of crisis; we need to work in unity to achieve the goal of giving hope and providing succor to all victims. I urged all citizens of goodwill and humanitarian agencies to demonstrate solidarity with these victims and provide support to those affected.”

Also, yesterday, Bayelsa State Government called on the federal government, the National Emergency Management Agency (NEMA) and the Ministry of Humanitarian Affairs to be holistic in their response to the flood disaster victims especially because of the peculiarity of the state.

According to the state, what the flood victims need most presently are food items because of the difficulties of transporting food to the state and not items such as clothes.

The Chairman of the Bayelsa State Emergency Management Agency (BYSEMA) Walaman Igrubia, while responding to report that relief materials had been distributed to the state by the federal government through NEMA, said the state only started receiving non-food items from NEMA on Thursday. He stressed that what the state or the victims needed most right now was food items because of the difficulties of transporting food to the state.

He said the report by the Ministry of Humanitarian Affairs and the Natural Disaster management agency, where it purportedly listed Bayelsa of one the state that had received relief materials was misleading, saying there was need to set the record straight.

He said, “So far, we started getting relief materials from NEMA as of yesterday (Thursday), we got some items that were airlifted from Port-Harcourt down to Yenagoa. We received some 598 cartons of bathing soap, five bags of mosquitoes treated net, nine bail of Guinea brocade materials.

“On inquiry, they said the food items are yet to come and that by today (Thursday), we should start getting the food items but I was still surprised that when they came, they brought non-food items.”

“But I think what is necessary for us right now is the food items which are very important because of the peculiar situation we find ourselves.

“A situation where we cannot get food through the roads because we are cut-off from both the Port-Harcourt and Warri flanks or the East-West road. The state government had to airlift food from Lagos.

“So what we need right now is food items so that people can see something to eat, most especially those at the Internally Displaced Persons (IDPs) camps across the state.

“I think that as a government under a federating country like Nigeria which we all belong and we are all part of, there shouldn’t be any hindrance to get us food or relief materials from the federal government, especially because of the situation we find ourselves.

“I am the Chairman of BYSEMA, for me, looking at the assessment of NEMA, it is not encouraging. Looking at it very well, food is what people need, the non-food items can come later.”

Meanwhile, the National Emergency Management Agency (NEMA) South-south Zone in collaboration with the Nigerian Air Force said it has commenced the airlift of relief supplies to persons affected by flood disaster in Bayelsa.

In a related development, Bayelsa State Governor, Senator Douye Diri, has expressed appreciation to those that have supported the state as it grapples with the raging flooding.

Diri, who spoke on Wednesday during the weekly state executive council meeting in Government House, Yenagoa, said the support received so far helped the state in its recovery process.

A statement by his Chief Press Secretary, Mr. Daniel Alabrah, quoted the governor as assuring that funds and items received would be published in line with the transparent posture of his administration.

The governor said he was grateful to the Labour Party presidential candidate, Mr. Peter Obi, for visiting the state last weekend, during which he made a pledge to support victims of the flood.

He also expressed gratitude to former Vice President Atiku Abubakar for his philanthropy and empathy shown to people of the state.

Abubakar, who is the Peoples Democratic Party (PDP) presidential candidate, was in Bayelsa on Tuesday to visit victims of the flood and donated the sum of N55 million.

Similarly, the Akwa Ibom State Governor, Mr. Udom Emmanuel, who visited one of the internally displaced persons (IDPs) camp at Igbogene with members of his cabinet on Wednesday, also donated N100 million on behalf his state government.

Diri equally appreciated an illustrious son of the state, Dr. Azibapu Eruani, who he said pledged during his visit to support victims of the flood with food items worth N350 million.

The governor also read a letter from his Lagos State counterpart, Babajide Sanwo-Olu, commiserating with the state and donating the sum of N50 million to tackle the floods.

“Let me use this opportunity to appreciate those who have showed themselves as our true friends and brothers. We called for help and God has sent helpers. We say thank you to those that have come through for us so far. We will publish all donations received,” he added.